Patrick Reed met his wife on Facebook after being ghosted by her sister! 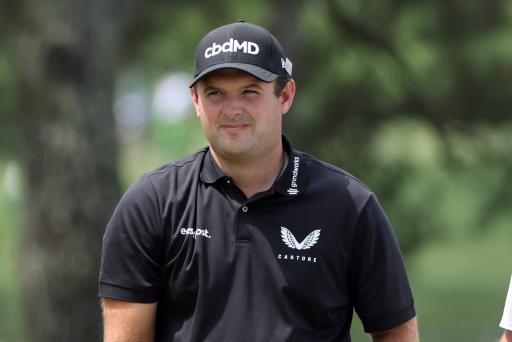 Patrick Reed has revealed his first interaction with his now wife Justine came on Facebook after having been ghosted by her sister Kris when going on a date with her, according to an interview with Golf Digest.

Reed explains how after the date he texted Kris to confirm she had got back okay, only for her to leave him on Read. That resulted in him heading to the search bar on Facebook to find her sister Justine.

"I was a freshman at the University of Georgia, and her younger sister, Kris, was at LSU," Reed told Golf Digest.

"Kris came to visit, and we went on one date, and I texted her to confirm she'd made it back home safe. No response.

"So I reached out to Justine on Facebook, who confirmed her sister was back and got frank with me about why it was probably not going to work.

"So I start talking with Justine, who I discovered is this incredibly driven person who was pursuing dual degrees while working to become a nurse.

"We kept talking as a couple of years went by, then we started dating. Best decision of my life."

Reed then told Golf Digest that he left home at 21 to be with Justine, who had previously been working as his caddie for two years on the PGA Tour.  Justine and Patrick then married a year later in December 2012.

"We were road warriors, driving Justine's Lexus IS 250 sedan, chasing Monday qualifiers around the country just like they did in the old days," said Reed.

"I had extra clubs and clothes. She had a full bag of makeup, full of hair products, 50 pairs of shoes... pretty hilarious, just trying to tilt down the seat to catch some sleep as she's driving through the night so that I could make a tee time."

He added: "With her caddying, we went six-for-eight in PGA Tour Mondays that year. For her to put her dreams aside to support me, I'll never forget that. Someday I hope to be half the person she is."