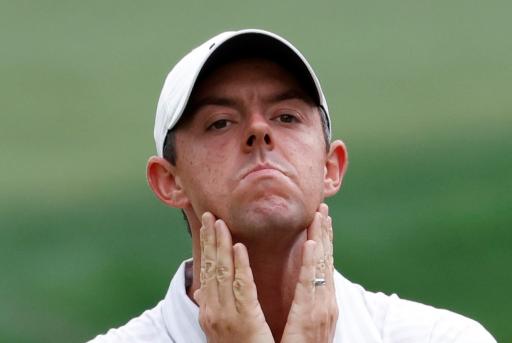 Rory McIlroy has slammed Saudi Arabia's latest 'Super League Golf' concept that is attempting to draw the best golfers away from the PGA Tour and European Tour into their breakway golf circuit.

According to reports, 11 players - four of which include Dustin Johnson, Bryson DeChambeau, Phil Mickelson and Justin Rose - have been offered contracts worth in the region of $30 to $50 million to sign up for the breakaway golf super league.

Plans are in place for a golf super league to commence next September, a circuit to feature between 40 to 48 players in an 18-event schedule with a season-ending team championship

"The money is there," an agent reportedly told Golfweek. "I heard $1 billion. This is real."

McIlroy, 32, made his feelings be known ahead of this week's Wells Fargo Championship, claiming the proposals for a new Golf Super League were nothing more than a "money grab" - just as the case proved with football's stunning European Super League collapse last week.

"I don't think it was a coincidence that the news came out on Wednesday, just as the PGA Tour was having its annual player meeting and our CEO Jay Monahan was addressing the membership," said McIlroy, who is bidding for a third title at Quail Hollow this week.

"I think you all know my feelings, that I am very much against it. I don't see why anyone would be up for it.

"Just like the European Super League in football, people can see this is nothing more than a money grab.

"They first contacted me in 2014, so this is seven years down the line and nothing really has changed.

"Maybe the source of the money has changed, or the people in charge have changed but nothing has really happened.

"If you're only in golf to make as much money as possible then fine, go and do what makes you happy. But I think the top players in the game, and these are my personal beliefs, I'm trying to win majors and the biggest tournaments in the world and cement my place in history.

"That's why I'm playing the game."

McIlroy, who chairs the Players Advisory Committee on the PGA Tour, fully supports the stance taken by the American circuit's boss.

"You have to protect what you have," added McIlroy.

"It's a competitive threat. And Jay took us through it last night. It's in the by-laws that were written by the members."

Justin Thomas is another big-name player who has turned his nose away at a proposed golf super league.

"I don't know where it's going to go because everybody feels differently and everybody's in different places in their career," said Thomas.

"If I was to go do that, then all those things go down the drain and I can't do that."

The European Tour and PGA Tour have made it clear that anyone who signs up to the proposed breakaway golf super league, will lose their Ryder Cup rights.

Monahan has even told the Guardian that "a lifetime ban lie in wait for anybody who agrees to join the new tour."

NEXT PAGE: RORY MCILROY FEELING GOOD ABOUT HIS GAME AHEAD OF THE WELLS FARGO