Shane Lowry just made a hole-in-one on the Island Green 17th, then Patton Kizzire followed up in the group behind by SHANKING IT into the water. 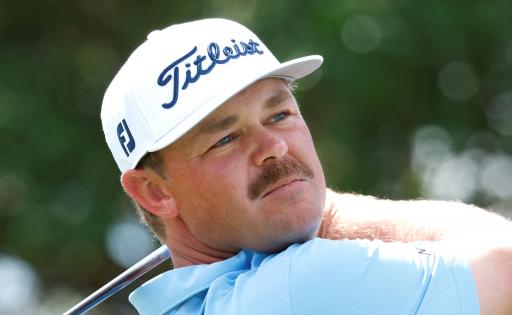 Patton Kizzire hit a shocking shank on the iconic par-3 Island Green 17th at TPC Sawgrass in the third round of The Players Championship.

Kizzire's awful wedge shot came just 10 minutes after Shane Lowry made the first ace on the hole in the tournament's history since Ryan Moore in 2019.

The American contemplated the shot in hand with his caddie on the tee and then proceeded to hit a shot that many of us are accustomed to seeing during our weekend rounds.

Won't be the last. pic.twitter.com/LmssETi9FA

Whatever resources they had working on getting Gold Man to re-enact Lowry's ace, we need them redirected towards Kizzire's shank.

Two seconds ago we were tweeting about an ace. Now a shank. Golf comes at you fast man. pic.twitter.com/WT1rfE0zOr

Kizzire then went to the drop zone and played a wedge into the heart of the green, before two-putting for a double-bogey five.

He would quickly recover though when making an eagle at the par-5 2nd, his 11th hole of the round, to move back into contention.

The World No.129 has won twice on the PGA Tour with victories at the 2017 OHL Classic at Mayakoba and 2018 Sony Open in Hawaii.

Kizzire has been struggling for form so far this year with just one top-10 finish in 2022 coming at the WM Phoenix Open.

RELATED: WATCH MATT WOLFF THROWS HIS CLUB IN THE WATER AT THE PLAYERS

NEXT PAGE: JUSTIN THOMAS "BLACKED OUT" AFTER HIS SECOND ROUND