SOUND ON! Joaquin Niemann hits STUNNING wedge for hole-out eagle at The Players

Joaquin Niemann hits one of the shots of the day at the par-5 9th at The Players Championship. 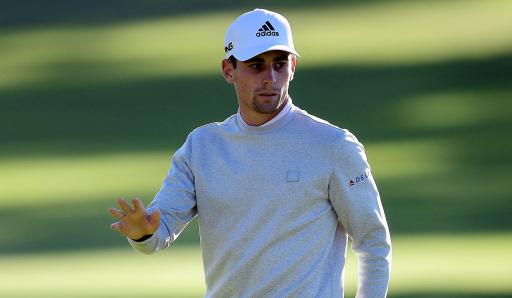 Joaquin Niemann hit one of the shots of the week so far when slam-dunking his third shot into the cup for an eagle-three at the par-5 9th in the third round of The Players Championship.

Niemann had been enduring a slow start to his third round at 1-over thru eight holes but things quickly picked up for the in-form Chilean as he holed out for eagle to move to 1-under for the round and to 5-under par for the tournament.

It marked one of a number of superb shots played in the third round on Sunday evening, highlighted by Shane Lowry's incredible ace at the par-3 17th.

We also saw one of the worst shots of the PGA Tour season so far though as Patton Kizzire unfortunately hit a shocking shank on the same hole.

The third round will conclude on Monday morning, with the final round to be completed in the afternoon.

It will mark the first time The Players has finished on a Monday since Fred Funk landed the spoils in 2005.

WATCH: SHANE LOWRY MAKES A HOLE-IN-ONE ON THE 17TH HOLE AT THE PLAYERS CHAMPIONSHIP

WATCH: PATTON KIZZIRE HITS A SHOCKING SHANK ON THE 17TH HOLE AT THE PLAYERS CHAMPIONSHIP

WATCH: MATT WOLFF THROWS HIS CLUB IN THE WATER AT THE PLAYERS CHAMPIONSHIP

NEXT PAGE: KEEGAN BRADLEY RECEIVES A BRUTAL TWO-SHOT PENALTY AFTER FALLING FOUL OF THE RULES ON THE PUTTING GREEN AT THE PLAYERS CHAMPIONSHIP