PGA Tour commissioner Jay Monahan admitted that the PGA Tour can't financially compete with the LIV Golf Series in a press conference at the Travelers Championship. 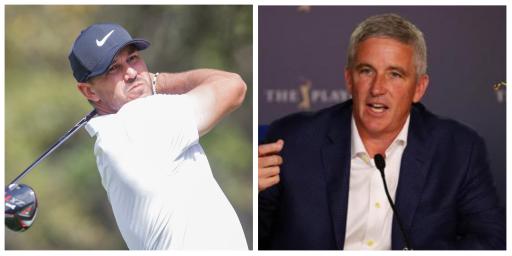 PGA Tour commissioner Jay Monahan strongly stated the LIV Golf Invitational Series is not "good and healthy competition," admitting they cannot compete on the financial side.

Monahan accused LIV Golf of attempting to "buy the game of golf" and become the dominant force in a sphere where the tour, the LPGA, the USGA and the PGA of America all have mutual interests at heart.

Addressing the media at the Travelers Championship, Monahan used Scottie Scheffler's rise to becoming a major-winning World No.1 as the key example of "the beauty of the PGA Tour."

The 52-year-old also discussed the changes to the PGA Tour in 2024 which will include a revised FedEx Cup ranking system and a return to a calendar year set-up.

"As I said to the players yesterday, let me be clear. I am not naive. If this is an arms race and if the only weapons here are dollar bills, the PGA Tour can't compete," Monahan read in his opening statement in Connecticut.

Commissioner Jay Monahan speaks with the media ahead of the @TravelersChamp. https://t.co/AmC521NdQu

"The PGA Tour, an American institution, can't compete with the foreign monarchy that is spending billions of dollars in an attempt to buy the game of golf.

"We welcome good, healthy competition. The LIV Saudi golf league is not that. It is an irrational threat and one not concerned with the return on investment for true growth of the game.

"Currently, not one organisation owns or dominates the game of golf. Instead, the various entities, be it Augusta National or the USGA or the LPGA or the PGA Tour or the PGA of America, we're together to meet our own respective priorities. But with the best interests of the game at heart.

"But when someone attempts to buy the sport, dismantle the institutions that are intrinsically invested in its growth and focus only on a personal priority, that partnership evaporates.

"Instead, we end up with one person, one entity using endless amounts of money to direct employees, not members or partners, towards their personal goal, which may or may not change tomorrow or the next day.

"I doubt that's the vision any of us have for the game. I know legacy and purpose sound like talking points that don't mean much, but when I talk of those concepts, it isn't about some intangible, moral high ground.

"It is our track record as an organisation and as a sport. On the PGA Tour, our members compete to add their names to history books and yes, significant financial benefits without having to wrestle with any sort of moral ambiguity."

Only a couple of minutes into his press conference at TPC River Highlands, LIV Golf confirmed that Brooks Koepka had joined their roster for the second event in Portland on June 30.

Monahan last spoke to Koepka on Monday and he was disappointed to hear of the four-time major champion's decision. As per the rules he set out on June 9, Koepka will be suspended by the tour and is due to be removed from the FedEx Cup rankings.

Letter sent from Monahan to the players today. pic.twitter.com/g6qjsMG3PF

Serving as commissioner since January 2017, Monahan revealed he'd received a letter from Andy Gardiner, the CEO of the Premier Golf League, but he doesn't see a future in this separate breakaway league.

Monahan was joined by 100 players at the mandatory player meeting on Tuesday where he explained the planned changes to the PGA Tour next year and in 2024.

There will be a return to the calendar year schedule from January to August with the FedEx Cup Playoffs and the autumn events which will decide the top 125 for the next season.

The first full year of this system will begin in 2024. The 2022/2023 season will begin with events in the autumn of this year and will continue to the FedEx Cup Playoffs in August 2023.

The revised qualification for the 2023 Playoffs will be the top 70 at the FedEx St. Jude Championship, the top 50 at the BMW Championship and the top 30 at the Tour Championship. The top 70 will automatically qualify for next season's FedEx Cup campaign.

The new schedule will also include up to three international events to be played after the autumn rota and these will include the top 50 players on the FedEx Cup points list and the best performers in the autumn as part of a limited field, no-cut format.

All players will be eligible to compete in the autumn events, but those outside the top 50 will compete for places in the new, international limited-field tournaments.

Those outside of the top 70 will compete for FedEx Cup points in an extremely important stage of the season where players are playing for their tour cards.

Huge prize purse increases have been made to various events on the PGA Tour schedule as well. These can be seen in the tweet above posted by No Laying Up.

Next Page: Justin Thomas quick to refute LIV rumours after WD'ing from Travelers