A PGA Tour caddie who was once given his marching orders after less than 24 hours in the job is on the lookout for work again. 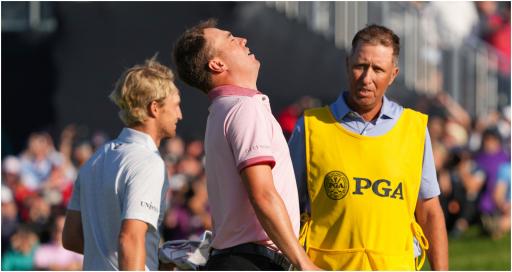 Cast your mind back to March at The Players Championship and you might remember the story about how a PGA Tour caddie was hired, then immediately fired.

Brent Henley revealed that he did not in fact get to carry the un-named player's bag for a single hole before he was given his marching orders.

"I got hired and fired in less than 24 hours," he wrote on social media, before adding: "Caddying ain't easy."

Henley refused to name the player when pressed by inquisitive minds on social media, but added that he "understood the thinking".

He is right, getting the bag of a player is a difficult task and then there is absolutely no guarantee that things will work out.

And it's an important job, too. You need to know your player, your yardages and you'll also need to get on well with your boss.

After winning his second major last week, Justin Thomas said there was absolutely no doubt in his mind he would not have won had it not been for Jim "Bones" Mackay.

Mackay gave Thomas a pep talk on Saturday evening before the final round and in the end it proved vital for the 29-year-old's confidence down the stretch.

Unemployed again!!! I spent basically 20 years of my caddie career being loyal with just 2 players and now I am getting bounced around like a ping pong ball. Caddying ain’t easy!!

Henley has spent more than 20 years looping on the PGA Tour. He is the younger brother of Kip Henley, who was the bag man for the likes of Vijay Singh and Stewart Cink.

Kip Henley once revealed that he believed cheating was rife on the PGA Tour. So much so, he claimed in 2018 that it happened "every round".

Of the profession, Kip said: "Most people have no idea what it's like to be a caddie on the PGA Tour.

"They think that everyone makes money like crazy, but truly, there are only a handful of guys that never struggle as a caddie. The rest of us caddies have to hop around and try to stay on a bag.

"We make a weekly salary and try to cut corners as best as we can. But unless your player makes the cut, you're not making any money."

But back to Brent, who is on the lookout again for another player.

He took to social media to say that he's spent "basically" 20 years of his caddie career being loyal with just two players but now he is being "bounced around like a ping pong ball".

Brent has previously been on the bag for former PGA Tour rookie of the year Woody Austin, who won four times on the circuit.

He's also worked with Garrett Willis, who became the fourth player to win on his PGA Tour debut at the 2001 Tucson Open.

Henley has also worked for Robert Garrigus, who became the first PGA Tour player to confirm that he had applied for a waiver to play in the opening event on the Saudi-backed LIV Golf Invitational Series earlier this season.