Justin Thomas' sleep stats go some way in helping us understand his winning week at US PGA. 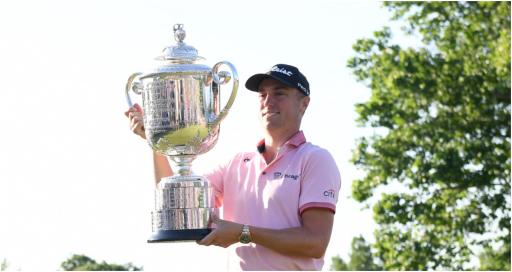 Newly crowned US PGA champion Justin Thomas is the sort of player who appears to leave absolutely no stone unturned.

He's very meticulous with his preparation and has even admitted he is just a little too hard on himself sometimes.

Were it not for a motivational pep talk from his caddy Bones late on the range on Saturday evening, Thomas may have departed Southern Hills with disappointment.

And one area that Thomas likes to keep on top of is his recovery. You may have noticed the 29-year-old wearing a black strap on his arm as he hoisted the Wanamaker.

That is Thomas' Whoop strap, which is a digital performance and recovery tracking band. Rory McIlroy wears one, too.

Whoop said that Thomas spent nine hours and 50 minutes in bed on Saturday evening, which is one hour and 24 minutes longer than his average over 30 days.

Thomas managed to get two and a half hours of REM sleep and one hour and 50 minutes of "slow wave" sleep, they said. Slow wave refers to your deepest sleep stage and therefore providing the most amount of recovery.

Whoop have shared an image of Thomas' recovery stats on their Instagram page, charting his recovery  and sleep over the course of the week in Oklahoma.

Thomas made a solid start to his major championship but admitted that he felt a little bit congested and was fighting off allergies.

He reportedly adjusted his practice plan so that he could prioritize his sleep and be better recovered.

As you can see, his scores on Friday, Saturday and Sunday all hit the green numbers to indicate that he was sufficiently recovered.

Even during his three hole playoff against Will Zalatoris, Thomas did not look as if he was lacking in energy.

It all goes to show that there's a lot more to this game than being a good golfer.

On Monday morning, Thomas posted that his recovery was just 44 per cent after he won his second major.

More: Bones finally got a memento Mickelson never gave him

Next page: Tiger is still a freak of nature, says JT