Lefty gifted this soon-to-be 90 woman his golf ball who told him: "You have always been my boy". 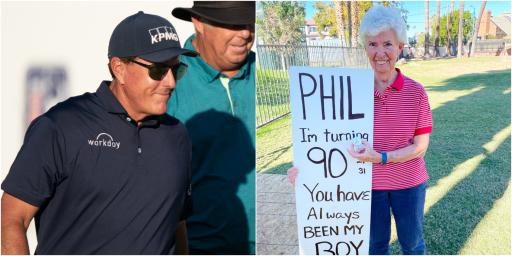 Phil Mickelson gave an 89-year-old superfan a souvenir on the PGA Tour Champions this week: his golf ball.

Lefty is playing the Charles Schwab Cup Championship at the Phoenix Country Club.

As ever on the seniors' circuit Mickelson, 51, is in contention again and at the time of writing only trails Kirk Triplett by three shots going into the final round.

Mickelson has already won three times on the circuit in 2021. Victories at the Constellation Furyk & Friends, the Dominion Energy Charity Classic and the Charles Schwab Series at Ozarks National underline just how good he has been.

He's bringing in a huge number of fans whenever he plays. One woman, however, appears to have been Mickelson's fan since the beginning. Her name is Patsy, and she lives on the estate at the Phoenix Country Club.

She held up a sign for Mickelson saying: "Phil, I'm turning 90. You have always been my boy."

Mickelson duly noted this appreciation and as he was passing through on his round he stopped just off the side of the green. "I'm gonna throw a ball over as a souvenir for you mam", he said as he lobbed his Callaway Chrome Soft X over the fence.

Mickelson already had a reputation as one of the good guys, but this just increases it.

NEXT PAGE: TIGER WOODS WILL TRY TO COMEBACK, SAYS JT