The 30-year-old Englishman has been tinkering with putters this week in Dubai but is yet to give us his thoughts. 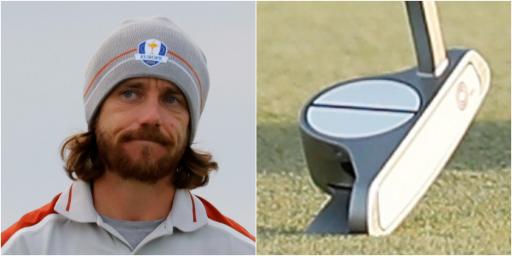 When you think of Tommy Fleetwood and his putting one thing usually springs to mind: the claw grip.

It's been a staple of Fleetwood's for years now and his success on the short stuff has earned him European Tour titles, a Ryder Cup victory and now he's considered one of the best players in the world.

Fleetwood has traditionally been someone who is known to roll it very well. Couple that with exceptional ball striking and accuracy off the tee and you have a recipe for unbridled success.

As of September, Fleetwood had been using the Odyssey White Hot OG 1, with a thicker Super Stroke grip. If it isn't broke, don't fix it. But Fleetwood has been tinkering with different putters this week at the Aviv Dubai Championship. Golf journalists claimed he was walking round the practice putting green with an Anser-style Odyssey blade, but then changed to this one.

You've heard of the @odysseygolf 2-Ball. But what about the 1-Ball? Tommy Fleetwood is wielding an interesting prototype this week. pic.twitter.com/DVsb2xn9B9

It's a particularly odd time to be changing something as important as a putter, considering there is vast sums of money up for grabs in the last two events. As of writing, Fleetwood finds himself in contention with 18 holes left. Over the course of this season in the Race to Dubai, he's averaged 1.8 putts per green in regulation which places him at 12th overall. He's averaging 28.8 putts a round which ranks him at 101st in that department.

Just looking at the putter, it's an interesting design. Instead of two white discs, only one is present with a single black line running down it for alignment. It will be interesting to see what he makes of it, but he's yet to speak about it to the media as of yet.

NEXT PAGE: JUNIOR GOLFER IN STITCHES OVER FAT SHOT

european tour
Tommy Fleetwood
dp world tour
aviv dubai championship
rolex series
Previous
Bryson DeChambeau shares his stock yardages and says YOU can get to his numbers
Next
Another missed cut for the self-anointed range rat: What's GOING ON with Koepka?