It's tight at the top at Memorial Park as Scheffler, Wolff and five others are in the mix. 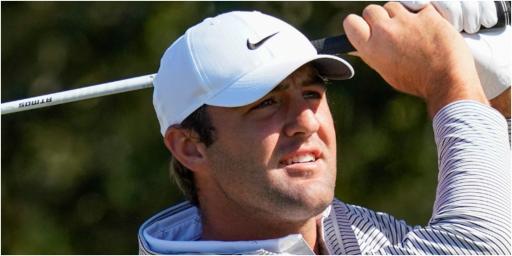 Matthew Wolff moved to within striking distance of the lead at the Houston Open after 54 holes on the PGA Tour.

The 22-year-old Texan has been in superb form in recent months and is only one stroke behind leader Scottie Scheffler at 7-under.

Wolff made two birdies and two bogeys as he made the turn at Memorial Park at level par but found some heat on the back nine.

Birdies at 13, 14 and 16 propelled him up the leaderboard but an error at 17 saw him find the wet stuff when he misjudged the wind.

Scottie Scheffler gets within 2. pic.twitter.com/M8Swjn1T2m

Wolff told Sky Sports: "To not even get over the hazard was pretty surprising, I guess I just misjudged it."

Scheffler continues his quest for that breakthrough win on the PGA Tour and has a one shot lead over five players.

Scheffler has had a slow-burning week here. An opening 72 was followed by a course record 62. He signed for a third round 69.

"Obviously I played a little bit better yesterday," he admitted to Sky Sports. "Had to be patient out there today."

Scheffler is widely regarded as one of the better players on Tour to not have a win. He was superb at the Ryder Cup.

Now he's in the final group as he searches for that maiden victory.

Wolff continued: "I feel like I'm really close but it's just a matter of maybe judging the wind a little better or getting the breaks.

"I feel really good with my game, it was one shot but unfortunately it was at the worst time.

"I'm not saying I'm not frustrated and I'm not saying that I wasn't pi**** when it happened but at the end of the day there's nothing I can do.

"I can't go back in time and re-hit the shot, so, just gotta keep on truckin' along. I feel really good with every part of my game.

"I've been in this position before close to the lead so hopefully I can get it done tomorrow."

MORE: PHIL MICKELSON GIFTS FAN, 89, ONE OF HIS GOLF BALLS