Another missed cut for the self-anointed range rat: What's GOING ON with Koepka?

Brooks Koepka has been off the boil for some time and has missed the cut for the second week in a row on the PGA Tour. 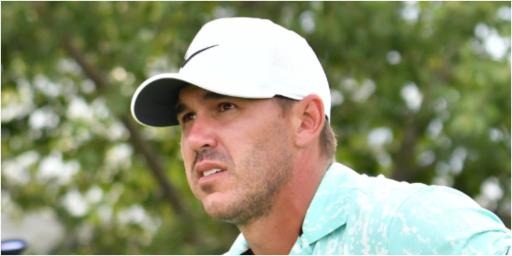 The self-anointed range rat missed the cut at Houston Open on the PGA Tour. He signed for a second round 72 which saw him finish at 3-over par through 36 holes after a similarly disappointing 71 on a rainy Thursday. Over 36 holes, Koepka made seven bogeys. The 31-year-old only found four birdies. Something isn't quite right.

It's surprising because he was involved in the $34 million redesign of the Memorial Park Golf Course where the Houston Open is being played this week. You'd think that Koepka would have known where his misses were and all the nooks and crannies this course has to offer. Koepka was involved in this event last season in the fall swing, too, and came in fifth as Carlos Ortiz won. It's strange seeing him struggle.

What's more, Koepka has been noticeably visible hard at work on the range. In the past, the four-time major winner and eight-time PGA Tour winner has revealed he only really brushes up on his game before the big ones. So seeing him play two weeks in a row on the fall swing is a little bit odd, especially when we see images of him grinding late into the night on the range.

Is this an elaborate troll? Does this coincide with the fact he's about to play Bryson DeChambeau in The Match and therefore he's being more visible? Or is he actually enjoying putting the hours in, at least in front of the cameras?

Koepka was spotted looking as if he was trying to get more tilt in his driver set-up this week. His right hand was seen touching his right knee as he tried to perfect his address position. Whatever he was trying, it hasn't translated to the golf course yet.

Here in Houston, Koepka's accuracy off the tee barely got over 46 per cent. On the greens, he gained 0.7 strokes on the field with the flat stick and only found 55 per cent of greens in regulation. It's not the Koepka we know. Form is temporary and class is permanent, of course. It's impossible to be consistent at golf. "I've been playing so bad for so long, so I'm just trying to play my way out of this thing and figure it out," Koepka told the media last week. "You know, hopefully we come out the other side soon."

Hopefully Koepka does find form in the near future. Two missed cuts in a row does not sound very Brooksy.

MORE: WILL RORY MCILROY RETURN TO WORLD NUMBER ONE?