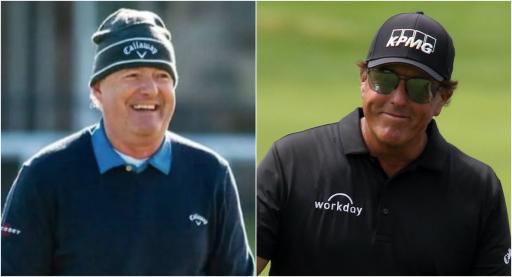 Piers Morgan has split opinion and made controversial comments in most of the roles he has had on television, but when it comes to his short game, we can all agree he holds some quality there.

Yesterday, Morgan was playing at Sunningdale, one of the finest golf courses in the UK and arguably the world and he was faced with a tough chip.

He appeared to be stuck in thick rough but luckily he was not too far short of the green. Morgan made great contact with the ball and splashed it out of the rough.

His ball landed short of the pin and rolled to about 12 feet. Although it didn't match the lofty heights of Phil Mickelson's short game, it was still a very good shot.

After his round, Morgan posted the video of his chip shot and he tagged the six-time major champion in his post, hoping for a witty response.

As per usual, Mickelson never disappoints with his humorous and funny tweets and he replied to Morgan in his own style.

"I couldn't have done it better myself," Lefty responded. I think we all know that the great man could have almost holed it, let alone get his ball inside Morgan's shot.

Mickelson, with wins at The Masters, the USPGA and The Open Championship, has built his career on incredible shotmaking and a stunning short game.

RELATED: RICKIE FOWLER "HATED" THE 17TH HOLE ON DAY ONE OF ZOZO CHAMPIONSHIP ON PGA TOUR

If you were to think of flop shots, bunker shots and outrageous chips, you could only think of one man. It is this element of his game that has helped him win 45 PGA Tour titles.

This is also the reason Morgan paid homage to Mickelson with his own chip shot. It goes to show we all dream of having a short game like the famous 51-year-old.