PGA Tour: ZOZO Championship leader mistaken for a caddie before first round

Hiroshi Iwata was motivated to play well at the ZOZO Championship after someone mistook him for a caddie. 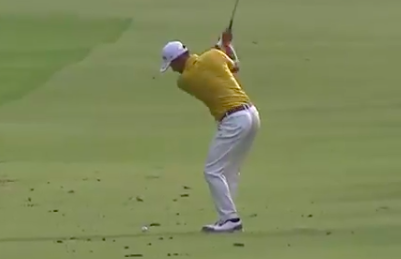 Hiroshi Iwata has not played in a PGA Tour event in four years. He played in 10 events in the PGA Tour season but missed the cut on eight occasions.

But things are different at Narashino Country Club this week now that Iwata is on home turf and playing in front of an adoring home crowd in Japan.

Iwata began his ZOZO Championship campaign on the 10th hole on Thursday and he made four birdies and a fantastic eagle in his first nine holes.

He made another two birdies on his second nine to finish with a brilliant 63. He leads the way on 7-under-par and one ahead of Masters champion Hideki Matsuyama and Joaquin Niemann.

However, before the tournament began, the 40-year-old was sitting down having a meal when an unnamed person asked him if he was a caddie, carrying for one of the players this week.

Hiroshi Iwata hasn't made a start on TOUR since 2017.

He currently leads at -7 in his native Japan. pic.twitter.com/Lh614q9WFd

"A lot happened earlier in the week," said Iwata after his first round.

"Someone asked me if I was a caddie when I was having a meal. Events like that get you more fired up to play well than someone giving you compliments.

"I don't want to get into the details, but this person was not a player."

Iwata, who turned professional in 2004, generously did not name the person who asked him this question, but whoever they are will certainly be feeling foolish now.

The man from Miyagi is a three-time winner on the Japan Golf Tour, but arguably one of the moments of his career came in 2015 when he finished tied 21st at the PGA Championship.

NEXT PAGE: RICKIE FOWLER "HATED" THE 17TH HOLE ON DAY ONE OF ZOZO CHAMPIONSHIP ON PGA TOUR