Ryota Kato is Tommy Fleetwood's biggest fan from Japan and he was able to meet him once again at the ZOZO Championship. 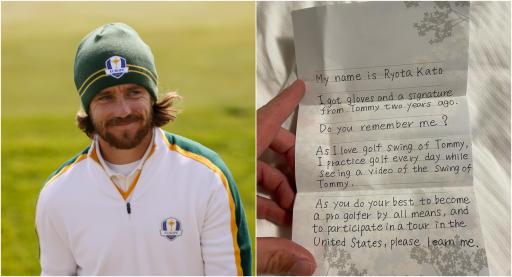 Tommy Fleetwood is one of the most popular European players in golf and this is a result of his instantly recognisable appearance and outgoing personality.

He is also one of the most consistent performers on the continent and he showed this in the first round of the ZOZO Championship on Thursday.

Fleetwood fired a nice round of 3-under-par at Narashino Country Club in Japan to sit just four shots behind first-round leader and one of the home favourites Hiroshi Iwata.

However, it seems that the Englishman is also one of the fan favourites this week in Japan as he met one of his adoring supporters from the golf-loving nation.

Fleetwood posted a picture of himself with a young fan named Ryota Kato, who he met for the first time two years ago on the PGA Tour.

Meet the great Ryota Kato, my Wingman for the @zozochamp. It’s so cool to meet young golfers who love the game. Thank you so much for the letter Ryota! pic.twitter.com/rvTEofDHnG

On that first occasion, the 30-year-old gave Ryota a golf glove and an autograph and the young man has never forgotten this moment.

This time, Ryota gave Fleetwood an absolutely heartwarming letter which he also posted on his Twitter page. The young fanatic wrote that he watches videos of the World No. 40's swing while he practices his own game.

Fleetwood described Ryota as his 'wingman' for the week at the ZOZO Championship and it wouldn't surprise me if we saw him feature with Fleetwood later on in the tournament.

After a humbling experience at the Ryder Cup at Whistling Straits, the man from Southport will be hoping to kickstart his 2021/2022 season with a win in Japan.

Fleetwood failed to reach the FedEx Cup Playoffs last season and he only made two top-10 finishes in 18 events in America.

NEXT PAGE: RICKIE FOWLER "HATED" THE 17TH HOLE ON DAY ONE OF ZOZO CHAMPIONSHIP ON PGA TOUR