Charl Schwartzel got stroppy and lobbed his club at the Valspar Championship then bounced back with a slam dunk eagle from 194 yards. 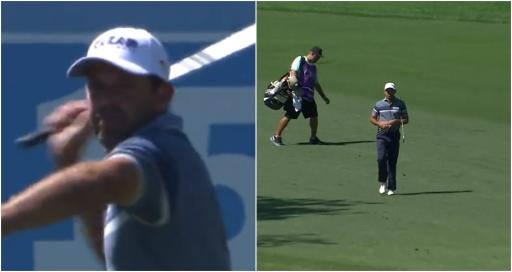 We have seen our fair share of temper tantrums on the PGA Tour in recent weeks and months.

More: Justin Rose has a strop at The Players!

First it was Matt Jones who decided that his putter simply needed to die as he launched it firmly into a lake.

Jones was seen toiling away in the short game area prior to his round at the Arnold Palmer Invitational.

At the 11th hole, he missed a short putt then duly went for the two-arm lob and shot putted the flat stick straight into the lake.

He was heard yelling: "I'm done! I've had enough with it!"

Some would suggest that only once he realised his club was heading towards the water did he know what he had done. He played it off, anyhow.

We think it slipped. pic.twitter.com/9s2xjw09dk

Then there was Justin Rose who lost his cool with his fairway wood at The Players.

Rosey tried to go for a par-5 in two at TPC Sawgrass but ended up smashing his shot straight into the lake. Cue rage.

At the same tournament, Matthew Wolff decided to go with the most casual club toss of all time.

Playing the 18th, he did not like what he saw and was simply over it. Done. Completely done. He had had enough.

Wolff later joked that the club slipped after footage emerged of him going for a different approach to anger.

Which leads us to Charl Schwartzel playing his first round at the Valspar Championship.

He was playing the par-3 15th hole measuring at 215 yards. He had a six iron in his hand, but when the ball landed it had departed his clutches.

Schwartzel was only 1-over par but it was a low scoring day, which compounded his frustration.

Schwartzel was probably still thinking about the triple bogey he had made at the par-3 13th hole after finding the water with his tee shot.

Then Schwartzel followed up that with a slam dunk from all of 194 yards at the 16th.

Perhaps this was one of the more interesting days in the career of the 37-year-old South African.

Next page: Matthew Wolff goes for the most casual club toss of all time