Brooks Koepka concedes he came back too soon from injury problems

Brooks Koepka admitted he came back from his injury too soon but is feeling 100 per cent now at the Valspar Championship. 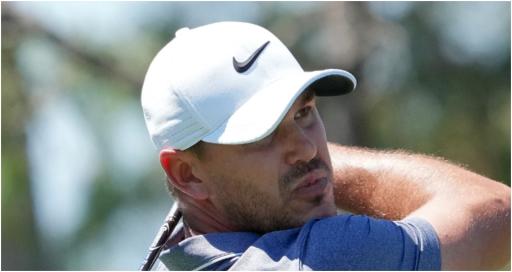 Brooks Koepka says he "came back too soon" from injury but is feeling fine now after his opening round at the Valspar Championship.

Koepka carded a 4-under par round on the opening day at Innisbrook Resort and is hoping to finally catch some form ahead of major season.

He was on the bad side of the draw at The Players and simply had to laugh it off as he toiled with the 17th hole which he labelled his nemesis.

He trailed Jhonattan Vegas by three strokes after 18 holes, who opened with a stunning 7-under par round on a gettable day in Florida.

Dustin Johnson, too, also had a solid opening to his week and matched Koepka's score. Defending champion Sam Burns had a good start, too.

More: Sam Burns realises he no longer needs to be perfect to win

Koepka said: "It's a tougher golf course. I think it's one of those ones where you got to put it in the fairway. You got to be a good ball-striker around this place to play well. I think that's suiting me.

"I drove it pretty well, struck it well, and hit a lot of good putts, just two of them caught a lot of the lip. I can't control that. That's just, I mean, what are you supposed to do?

"I felt like I played pretty solid. It was very, very easy. No stress. Stress-free. Three more of those, I should be right there."

Koepka was asked about good breaks and bad breaks. He claimed he felt his first round at Valspar had moments of misfortune.

But he said: "I don't care as long as I play good. You can play good and get hosed and get a, you know, pull a Paul Casey and hit it into a pitch mark and there's nothing you can do.

"You hit the center of the fairway, stuff like that. I'm playing well, so I'm just excited about that."

Did he make any adjustments heading into this week after an exhausting and bizarre week at TPC Sawgrass?

Koepka said: "No. I'm playing good, so I'm very happy with where I'm at. I feel like I've been playing well for a while, just some unfortunate stuff in L.A., and then The Players, bad side of the draw. So it happens. And Honda was just kind of a ho-hum week for me."

The 31-year-old was asked about his injuries.

He said: "I mean, I wasn't really supposed to play golf until October, so the fact that came back in April and played, I mean, I had in my mind I was going to win, so and it was going to be a cool story.

"But it's one of those things where nothing you can do. Physically limited. Looking back at last year, I definitely came back too soon, I should have waited."

Early leader Vegas said: "Absolutely great. Exactly what I needed after last week. Game was there. I took advantage of the great conditions this morning. Greens are little softer, not much wind, absolutely a perfect day out here. So, yeah, lucky to have shot a nice 64."