Viktor Hovland played a loose shot during the opening round of the Valspar Championship and had Dustin Johnson worried. 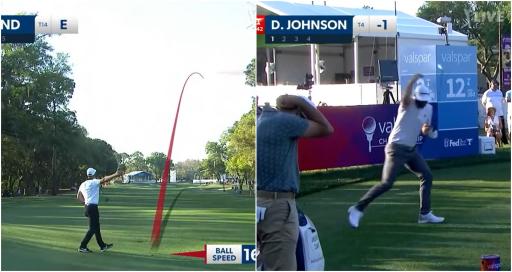 Viktor Hovland had Dustin Johnson ducking for cover during the first round of the Valspar Championship on the PGA Tour.

More: Viktor Hovland explains the drop fiasco with Daniel Berger at The Players

Hovland, who was embroiled in a tense exchange during last week with Daniel Berger over a drop fiasco, was trying to reach a par-5 in two.

What happened wasn't what we would usually expect to see from the young Norwegian, who is making waves this season.

Hovland was playing the 11th hole at Innisbrook Resort and took a typically aggressive pass at his golf ball.

But he came up and out of it and sent the ball high and right towards the 12th hole where Johnson was getting ready for his tee shot.

Johnson and his playing partner Jason Day heard the shouts but looked a little bit perplexed. Day covered his head in his hands nonchalantly.

Then you can hear the sound of the crack in the background of Hovland's ball clattering heaven knows what.

Hovland eventually managed to make a par on the hole on his way to an opening round of 2-under 69.

Johnson, on the other hand, managed to open up his championship with a 4-under 67.

Jhonattan Vegas carded a stunning 7-under opening round of 64 to take the early lead from the morning wave of players.

It was one shy of his best ever opening round on the PGA Tour.

Hovland was embroiled in a tense exchange at TPC Sawgrass at The Players Championship last week.

Berger thought his ball had crossed into a hazard at a different point on the 16th hole, but Hovland and Joel Dahmen thought otherwise.

Both Berger and Dahmen refused to talk to the media afterwards about it but Hovland said he was protecting the field.

He did not accuse Berger of cheating but simply suggested that he thought Berger was in the wrong.

Next page: Rory McIlroy claims teachers and nurses need to be paid more, not golfers