PGA Tour pro Mark Hubbard, who has taken the lead at the Sanderson Farms Championship, has revealed how his daughter accidentally stabbed him in the foot. 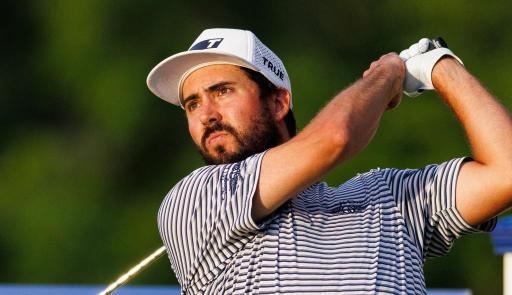 Mark Hubbard, who is looking for his maiden win on the PGA Tour, has revealed he was unable to practice for a week after his daughter accidentally stabbed him in the foot with a kitchen knife.

Hubbard has a one stroke lead ahead of Mackenzie Hughes at The Country Club of Jackson at the Sanderson Farms Championship through 54 holes after going 67-69-65 this week.

If the name sounds familiar, it's because he's already been involved in some amusing stories this year.

His brother Nathan was critical of the then LIV Golf Tour bound Brooks Koepka for remaining in the field at the Travelers Championship, preventing the "guys who are staying and need the checks" from teeing it up.

Ultimately, Koepka did "the honourable thing" and withdrew.

Hubbard was also involved in this hilarious moment when he dropped his club in absolute disgust at the Rocket Mortgage Classic, only for his golf ball to drop for a hole-in-one.

Speaking to the media after Saturday's third round, Hubbard revealed that his daughter accidentally knocked a kitchen knife onto the floor and stabbed him in the foot, somewhat hampering his tournament preparations.

Q. Did you kind of feel coming into the week that this could be a good week for you? What was your attitude Tuesday and Wednesday?

MARK HUBBARD: Absolutely not, no. I had last week off. My daughter got my sick, and then accidentally knocked off a kitchen knife off the counter and stabbed me in the foot, so I had a hole in my foot this whole week, and I didn't get to practice at all last week, so I was just kind of coming here trying to get ready for Vegas to be honest.

I think that probably has a lot to do with expectations being low. That being said, I felt incredible about my game for the last six, seven months, so I'm just kind of trying to go with it and keep those expectations low and just try and hit good golf shots.

But yeah, all that being said, I feel really good about my game. It's not like this is coming out of nowhere. We've been playing well for a while.

The defending champion of the Sanderson Farms Championship is Sam Burns, who was nine strokes off the lead. Burns was involved in this moment where he displayed a quick knowledge of the Rules of Golf.

Next page: Emiliano Grillo with one of the best club tosses you'll ever see!