PGA Tour pro Sam Burns knew INSTANTLY about this golf rule, but did you?!

PGA Tour pro Sam Burns knew instantly about this golf rule when he hit a tee shot during the second round of the Sanderson Farms Championship, but did you?! 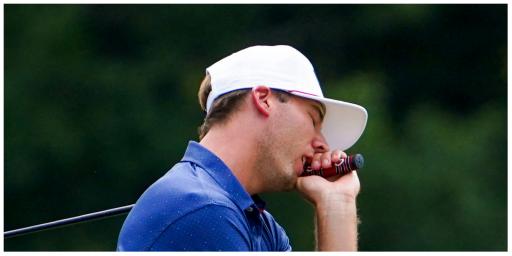 Sam Burns, who is the defending champion of the Sanderson Farms Championship on the PGA Tour, knew instantly about this golf rule that is rarely used - but did you?!

It's fair to say Burns will likely be a little bit frustrated at not being a factor at the top of the leader board at The Country Club of Jackson through 36 holes. He seems to love this place.

Related: Sam Burns watches on as Scheffler hits the coldest of shanks

At the time of writing, he was 5-under par, sitting in T-18 - some five strokes adrift of the leaders Thomas Detry and Mackenzie Hughes.

But back to the topic of this article. And Burns was standing on the par-4 9th hole.

The four-time PGA Tour winner absolutely piped one out of the centre of his driver.

Related: Tour pro tosses his club into the trees (!) but his ball goes to 10 feet

Burns knew straight away about Modal Rule E-11, which outlines:

"If it is known or virtually certain that a player's ball hit a power line (or tower or a wire or pole supporting a power line) during the play of (specify hole number), the stroke does not count. The player must play a ball without penalty from where the previous stroke was made."

Even the on-course analyst, John Maginnes, was initially befuddled. But then he said on PGA Tour Live: "Well, you're going to love this.

"It doesn’t matter where his golf ball is. Because he hit the power line about 20 yards off the tee. As soon as it hits the power line, that ball is no longer in play. You're required to hit another shot, no penalty. He lays one."

Speaking to the media later, Burns was asked about the ruling. He went on to make a safe par on the hole in the end.

Here's the full transcript of what he had to say:

Q. The unique ruling on No. 9, had that happened to you before?

Q. It seemed like you knew immediately right away the rule?

SAM BURNS: Yeah. I think it's auto re-tee is what I've always heard, so that's what I did. I guess that's right.

Q. What's that feeling when that happens? It's got to be a weird feeling.

SAM BURNS: It would have felt better if I would have hit a bad one, but I hit a perfect one. Then I hit the next one in the left rough, so that kind of stunk, but it is what it is. I know they're there; there's always a possibility you can hit them, I guess.

Well if you didn't know about this golf rule, you do now!

Next page: PGA Tour caddie to LIV players: "Be mad at your agent!"