Former PGA Tour caddie John Wood got involved in a debate about whether or not the LIV Golf Invitational Series should be awarded world ranking points. 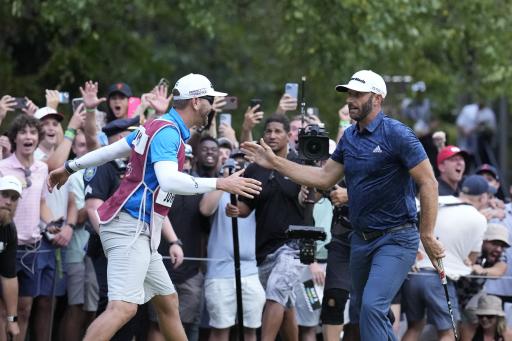 Former PGA Tour caddie John Wood - who carried the bag most recently for Matt Kuchar - has hit out at the "closed shop" of the LIV Golf Invitational Series in a debate about world ranking points.

Wood, who also looped for Mark Calcavecchia, Hunter Mahan and Kevin Sutherland before going behind the ropes as a reporter, decided to approach the hot topic this week.

In case you weren't aware, the LIV Golf Tour is without Official World Golf Ranking accreditation.

Some 50 players who have teed it up in LIV Golf events have written to Peter Dawson, the chairman of the governing body, pleading their case for ranking points as the strength of the fledgling circuit's fields has grown stronger and stronger through five events.

What is the OWGR's final decision going to be on LIV Golf tournaments?

Justin Thomas had thoughts about this topic. Understandably JT - who most recently joined Shane Lowry in clobbering Bryson DeChambeau harder than that gallery rope - essentially said the LIV players had made their decision.

Now live with it.

Even Billy Horschel managed to get off the fence for once to chime in with a view about LIV Golf.

Rory McIlroy, too, offered what can only be described as his most measured response to the world ranking points conundrum yet before the Alfred Dunhill Links Championship. Matthew Fitzpatrick echoed his sentiments.

Though McIlroy also decided to switch topic for a change and leapt to the defence of his caddie Harry Diamond, who he labelled as "an easy target".

But back to Wood, who said:

LIV GOLFERS want the right to play in PGA TOUR events at their leisure. Is Liv gonna open the doors to PGA tour players in their events when they choose to? No,because there are only 48 guys. In response to world ranking points?You knew the deal going in. Be mad at your agent.

He went further by explaining:

There shouldn’t be points. How real is competition when you show up & have alread been paid millions of dollars. Is there any pressure? If you are allowed to cherry pick Tour events,how real is your pressure compared to a guy trying to keep his card? It’s an uneven playing field

The battle for whether or not LIV receive ranking points has been viewed by some as more important than the current antitrust lawsuit, which was lodged in August.

This week, the PGA Tour have hit back by countersuing their rival.

Greg Norman, the LIV Golf chief executive, has expressed frustration at LIV not being granted world ranking points yet.

Per a report from SI's Bob Harig, Norman reportedly believes that LIV are being "slow played".

What do you think? Let us know on our social media channels.