The PGA Tour released a montage of shots from the previous 40 Players Championship winners, but this didn't include Phil Mickelson and Greg Norman. 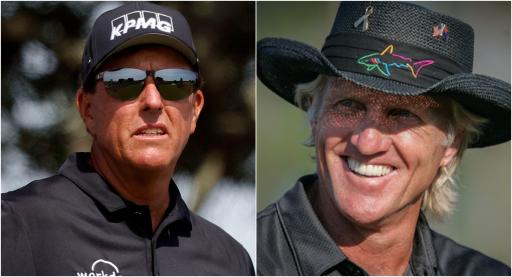 Phil Mickelson and Greg Norman were removed from a PGA Tour video that featured the winners of the Players Championship from the last 40 years.

In this video posted on social media, each shot is hit from the tee box on the famous par-3 17th hole from each year dating back to 1982.

However when it reaches 1994, when Norman won the event, the tour included a shot from Nick Faldo as opposed to the Australian.

Also, when the montage gets to 2007 when Mickelson won it, his shots to the 17th hole were omitted and replaced with a shot from three-time major champion Vijay Singh.

It is not clear whether these were deliberate moves made by the PGA Tour, however, it foreshadows the current relationship that Mickelson and Norman have with the premier circuit.

Related: PGA Tour boss Jay Monahan on Phil Mickelson: "The ball is in his court"

In the montage video, the vast majority of the Players Championship winners are included in their corresponding year, but some others have been left out too.

For example, Jodie Mudd won at TPC Sawgrass in 1990, but instead of Mudd's footage being included, a shot from two-time tournament runner-up Tom Watson was used.

PGA Tour commissioner Jay Monahan fielded questions about Mickelson at a press conference yesterday and stated that the ball is in the court of the six-time major champion.

Monahan also expressed his intent for the PGA Tour to move on from the tensions they experienced with the Saudi golf league and LIV Golf Investments.

"I have not talked to Phil since he made his comments and since he said that he was stepping away. Like I said, I think the ball is in his court," said Monahan on Tuesday.

"I would welcome a phone call from him. But it's hard for me to talk about the different scenarios that could play out. Listen, he's a player that's won 45 times on the PGA Tour. He's had a hall of fame career.

"He's won here at The Players Championship. He's inspired a lot of people and helped grow this tour, his tour. So as difficult as it is to read some of the things that were said, ultimately a conversation will be had when he's ready to have it, and I will be ready to have it, as well."