Phil Mickelson was filming a commercial for alcohol company Amstel at Maderas Golf Club in San Diego when a group of golfers arrived on the tee. 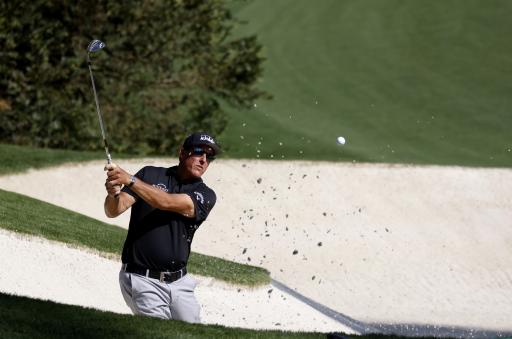 Three golfers were met with a big surprise when they reached the 7th hole at Maderas Golf Club in San Diego, when they saw five-time major champion Phil Mickelson on the tee box.

The legendary lefty was hitting balls while filming a commercial for the popular alcohol company Amstel, so this hole was out of action for the group that had arrived.

Victor Alfredo Lopez was one of the golfers in the group who couldn't play the 7th hole, but Mickelson kindly compensated him and his friends with $100 for their troubles.

Lopez posted a picture of the hole on his Instagram page with Mickelson accompanied by a fleet of buggies and cameramen who were part of the commercial production.

Amstel reached out to Lopez and asked him for his email address, so the lucky golfers could also be in for some generous gifts from the company.

Mickelson has always been known for his engagement with the crowd at tournaments and the generosity he shows to his fans when signing autographs and posing for photographs.

Mickelson didn't compete at the Zurich Classic of New Orleans last week, which was won by the Australian pair of Cameron Smith and Marc Leishman.

The three-time Masters champion will be in the field for the Valspar Championship this week as he looks for his first win on the PGA Tour since the AT&T Pebble Beach Pro-Am in 2019.

Mickelson has not enjoyed great form this season on the PGA Tour. After the Honda Classic in March, he dropped out of the top 100 in the Official World Golf Rankings for the first time in 28 years.

NEXT PAGE: PLAYER IMPACT PROGRAM SHOWS ALL THAT IS WRONG WITH MODERN SOCIETY