Trevor Immelman has rejected the "crap" and "disrespectful" suggestion to revamp the Presidents Cup and says he doesn't believe women should be included. 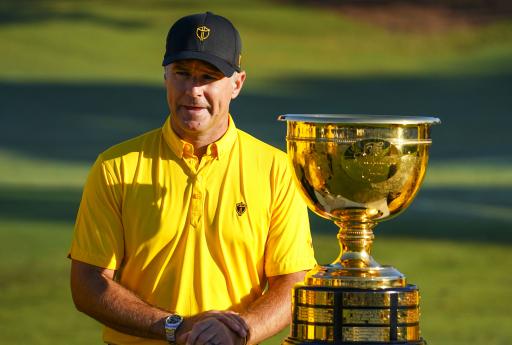 Trevor Immelman, who presided over the International side at the 2022 Presidents Cup, has blasted the idea revamping the biennial competition and rejected the suggestion of including female competitors.

Immelman, whose classy gesture at Quail Hollow Club went largely unnoticed, recently appeared on Claude Harmon III's podcast where he spoke about their 17.5 to 12.5 defeat to the U.S. side.

One of the proposals emanating from the most recent showdown was that the Presidents Cup potentially needs a revamp due to its one-sided nature.

The U.S. side are absolutely dominant when it rolls around and they improved their record in Charlotte, North Carolina to 12-1-1 since its inception in 1994.

"I find it disrespectful on all accounts, to be extremely honest with you," said Immelman, 42.

"I find it disrespectful to us as international golfers that are professional athletes that compete at the highest level week in and week out. We're not scrubs. Are we as strong as the Americans?

"[It] doesn't quite look like it right now. Have they kicked our butts in this event? They sure have. But there's been some close calls, and so I find it disrespectful to us."

Paul McGinley was just one of the high-profile names who was calling for the inclusion of women.

Though it has to be said that his thoughts appeared to stem from the fact the 2022 Presidents Cup sides - particularly the rest-of-the-world team - was hit by players who decided to join the LIV Golf Tour.

Some even appeared to have LIV buyer's remorse over this topic.

"I find it equally disrespectful to the women golfers," continued Immelman.

"It's one of my favourite times of the year when that event goes on. I watched the US Women's Open. I watched the Women's British Open a few weeks ago when South African Ashleigh Buhai came down the stretch, almost coughed it up and won in the playoff at Muirfield, matching Ernie Els' win at the Open at Muirfield.

"Women don't need men to make them relevant in sport. My family and I were glued to the TV when Serena Williams played her last match at the US Open. She's one of the greatest athletes to ever walk on the planet. So, I find it disrespectful on all accounts when people come with that opinion. I appreciate the fact that they may be trying to think outside the box, but they need to come up with something else."

Related: Jay Monahan "blue in the face" over LIV Golf

Immelman's parting thought was: "Let's leave the Presidents Cup and the International team alone, for now. And let us compete, and allow youngsters from Thailand and China and Japan and Korea and Australia and South Africa and Canada and all over South America, allow them to grow up with this as their goal, to be able to compete on this level, because we are eventually going to win this event, I promise you."