Jay Monahan's current LIV Golf thoughts? "I'm getting blue in the face on this!" 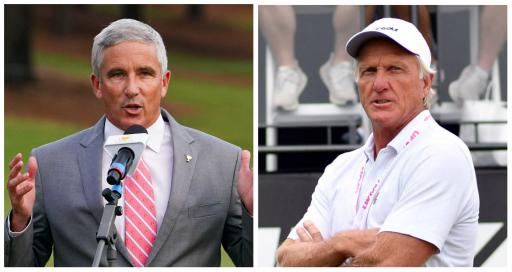 Jay Monahan has once again re-iterated the PGA Tour cannot come together with Greg Norman's LIV Golf Invitational Series as he stated he feels he is "getting blue in the face" about what he is trying to protect.

Monahan has given a wide-ranging interview with ESPN's Mark Schlabach. The embattled Tour commissioner spoke on a number of topic's including Norman's most recent visit to Capitol Hill where he put the case for LIV before lawmakers.

He also beamed with pride about Tiger Woods and Rory McIlroy's involvement. He described them as: "Two icons of the game taking responsibility by bringing guys together and continuing to think of ways to improve the PGA Tour."

In the interview, just some of the takeaways include:

Here are some key bits:

Some players have said that the tour and LIV need to come together. What is your opinion?

Can the PGA Tour and LIV Golf coexist?

Monahan: "I'd provide the same answer. The answer to that is they've gone down their path and I think we have been pretty consistent that we're going down ours, and I don't see that happening. Haven't, and I don't."

What did you make of LIV Golf CEO and commissioner Greg Norman's recent visit to Capitol Hill?

Monahan: "We've been going to Capitol Hill multiple times a year for well before I got to the PGA Tour, and I didn't and I don't make much of it. If you go back to July 2, 1974, when the PGA Tour was granted [nonprofit] status, it's something that we take great pride in. If you look back since that point in time, we've raised over $3.3 billion for charities, and we have promoted the values of the game, the competitive spirit of the game, and every constituency, every market here across all of our tours has benefited from that [nonprofit] status. We feel very strongly and we take very seriously, that responsibility.

"So anybody that wants to attack it, we're very comfortable to tell our story and not only our story today, but the continued incredible work that we're going to do to benefit people and communities going forward."

Elsewhere, Monahan was pressed on Woods and McIlroy's involvement after their orchestrated a meeting of the Tour's biggest stars before last season's FedEx Cup Playoffs.

He said of their involvement: "At the end of the day for me, and I feel like I'm getting blue in the face on this, but the competitive framework here and the integrity of that is so important. And that's what those players are trying to protect. And so to me, understand, respecting history, respecting tradition, honoring it at the same time, figuring out how we can evolve in a way that actually improves upon that is the absolute right way of going about things.