Justin Thomas will face Si Woo Kim in the first match of the Sunday Singles; Tom Kim vs Max Homa. 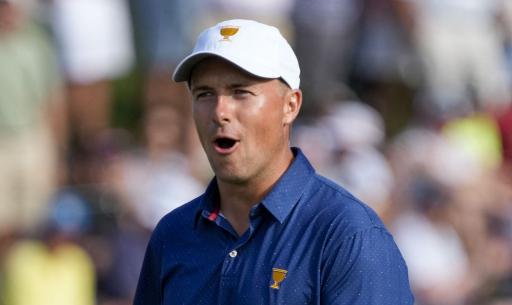 Justin Thomas will face Si Woo Kim in the opening match of the Sunday Singles at the Presidents Cup, with Jordan Spieth up against Cam Davis in match two.

Thomas and Spieth are the top combined points scorers so far this week with four points from four.

The American duo become only the third pairing in the history of the Presidents Cup to win four points.

Davis Love's United States side will take an 11-7 lead into the final day over Trevor Immelman's International side, who valiantly rallied by taking the Saturday session 5-3.

But despite their best efforts, USA need to pick up just 4.5 points to win the Presidents Cup.

If the USA do go on to win, which does look highly likely, it will mark their 12th win in the 14 renewals of the Presidents Cup.

It would also continue their impressive streak of never having lost a Presidents Cup on home soil.

Sam Burns takes on Hideki Matsuyama in match three, with Patrick Cantlay up against Adam Scott in match four.

More: Scheffler hits a cold shank and then gets dropped by captain Love

Jordan Spieth after the International side fight back on Saturday at the #PresidentsCup: "We've got a lot of pissed off guys that want to come out really strong tomorrow."

Xander Schauffele: "Yeah, I guess I'd be one of those pissed off guys." pic.twitter.com/9lu4fsF56w

I want it loud tomorrow Charlotte Bring the damn noise

Xander Schauffele takes on Corey Conners in match seven, with Cameron Young up against Sungjae Im in match eight.

Homa has already tweeted his delight at the match-up against Kim, and he wants the fans to "bring the damn noise".