Rickie Fowler made a disastrous quintuple-bogey on the 18th hole in the third round of the FedEx St. Jude Championship, taking him out of contention. 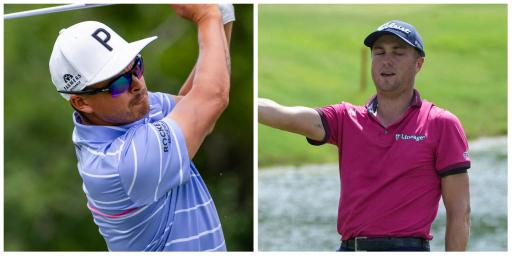 Rickie Fowler scraped into the FedEx Cup Playoffs at the Wyndham Championship and after 53 holes at the FedEx St. Jude Championship, he was taking the opportunity by the horns.

He was 7-under-par and with an outside chance of winning on the PGA Tour for the first time in three years. Even a good finish could see him into the BMW Championship next week.

The American found the water twice on the 18th hole at TPC Southwind and he ended up holing a three-foot putt for a nine. He dropped to 2-under-par in tied 58th place, 11 shots behind J. J. Spaun on 13-under-par.

Fowler looked on course to have a good week in Memphis after an opening round of 65, but a 71 stalled his progress on Friday and now a 72, which should've been a 67, has taken him back to a projected 123rd in the FedEx Cup standings.

The disaster on the 18th hole is arguably representative of his disappointing season. Just one top-10 finish to note and a whole load of rumours surrounding a move to the LIV Golf Tour as well.

However, you can always rely on your friends to see the brighter side and this is exactly what two-time PGA Championship winner Justin Thomas did following yesterday's third round.

On the PGA Tour's Instagram post which documented Fowler's nine, Fowler commented: "How'd you make a 9? Well my putt for 8 didn't break right."

Thomas replied, "It's ok @rickiefowler... you kept er in the single digits!" To which Fowler came back with: "Don't think I wasn't thinking about it on that three-footer for 9... must make!!"

A nine may be bad, but a 10 certainly would've been a tough one to process for Fowler. Thomas also disappointed on Saturday with a round of 71. He is on 5-under-par with 18 holes remaining, projected 13th in the FedEx Cup standings.