Yes, you read that headline correctly. During the third round on Saturday, Rickie Fowler interrupted his round to grab some refreshment at Riviera. 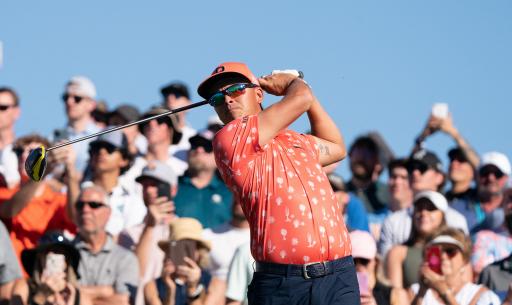 Cameron Champ and Joel Dahmen were absolutely delighted to be drawn with Rickie Fowler in the third round of the Genesis Invitational, for a very good reason.

The trio started on the 10th hole in the third round at Riviera Country Club and after his fantastic eagle on the 17th hole, Fowler must've been in a generous mood.

After making par on the 18th hole, his ninth hole of the day, the 33-year-old took a diversion to the player dining area in search of some treats.

Fowler reportedly emerged with a tray full of turkey sandwiches, ready to be consumed by himself, his caddie, Champ, Dahmen and their caddies too.

This is why his American friends will have been delighted to be drawn to his group. What other player is capable of turning from PGA professional into sandwich waiter?

RELATED: RORY MCILROY: AFTER TAKING DOWN PHIL, THIS NORMAN DAGGER WAS DELIGHTFUL

Fowler just tapped in for par on his 9th hole, ran into player dining, and emerged with a cafeteria tray of turkey sandwiches for the entire group and caddies

It was another disappointing week for Fowler by the time he teed off on Saturday, he was level-par and 16 shots behind Joaquin Niemann who went on to win the event.

The five-time PGA Tour winner, whose last victory came at the Waste Management Phoenix Open in 2019, finished in a tie for 55th place at Riviera.

However, it is a shame to say that this was an improvement on his recent play. He had missed three consecutive cuts before arriving in LA and he has missed four cuts in eight events so far this season.

When he finished tied third at the CJ Cup at the end of 2021, his play and competitiveness up against Rory McIlroy and Collin Morikawa looked to be a sign that he turned a corner.

However, this has proved to be far from the truth. He is still ranked 121st in the world rankings and Fowler fans are still looking for a glimmer of hope.