Rory McIlroy and Justin Thomas have given their immediate reactions to the PGA Tour suspending the Saudi rebels. 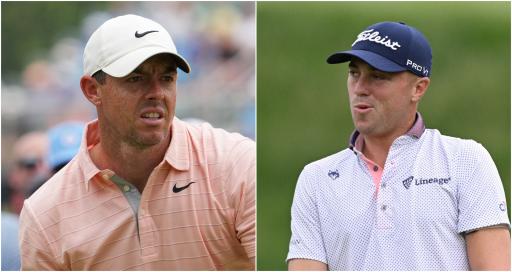 Rory McIlroy admitted he plans to “see what all the fuss is about” and watch the Saudi-backed LIV Golf series after starting strongly in the first round of the RBC Canadian Open.

McIlroy, 33, carded an opening round of 4-under 66 at St. George’s Golf & Country Club in Toronto and is only three strokes off early leader Wyndham Clark who fired a sublime 7-under 63.

On a chaotic day in the golf world, the PGA Tour have finally taken action against their members who defied orders to participate in the inaugural LIV Golf Invitational Series opener at Centurion.

Northern Irishman McIlroy, who is the defending champion in Canada, has always been vocal on the topic and he was asked for his immediate reaction to Jay Monahan’s memo to players.

That memo that was delivered to PGA Tour members 30 minutes after Phil Mickelson and Dustin Johnson hit their opening tee shots in St Albans.

“I think at this point, Jay's been pretty transparent in terms of he's just going to act within the tournament regulations and the rules that are set for a PGA Tour member,” said McIlroy.

“All he's doing is basically going by the book.

He added: “I think that the majority of the membership that are here this week and that haven't [gone] and played elsewhere really appreciate that.

“So, I think he's done the right thing because these guys have broken rules and done things outside of the tournament regulations, and because of that, there are going to be consequences, I guess.”

McIlroy was asked if he was going to watch the new league. He has consistently distanced himself from the venture, calling it a “money grab”.

He said: “Yeah, I think like everyone else, I'm intrigued and I'm a fan of golf.

“I've got quite a few guys over there that I call friends that are playing. Yeah, of course I'll see it and watch it and see what all the fuss is about.”

Justin Thomas fired a 1-under par 69. He said of the LIV Golf suspensions: “I'm pleased. I think anybody that's shocked clearly hasn't been listening to the message that Jay and everybody's been putting out.

“They took that risk going into it, whether they thought it was a risk or not.

“Like I've said the whole time, I have great belief and great confidence in the PGA Tour and where we're going and continuing to grow to, and those guys just aren't going to be a part of it.”

After the first round, England’s Matt Fitzpatrick is one stroke behind Clark. His brother Alex, who recently turned professional, turned down a multimillion offer to join the LIV Golf Series.