Phil Mickelson played in the first pro-am of the LIV Golf Invitational Series at Centurion today and we walked with him and his playing partner Lee Westwood. 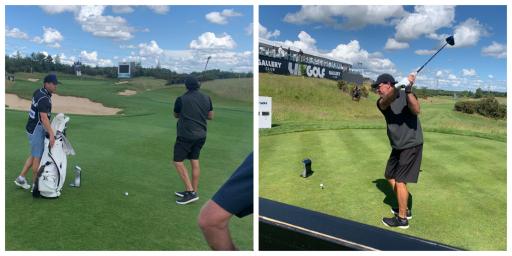 GolfMagic went inside the ropes at Centurion Club to watch Phil Mickelson and Lee Westwood play in the first pro-am of the LIV Golf Invitational Series.

I waited behind the 16th tee box for Mickelson and his group to arrive, having seen Wade Ormsby and Andy Ogletree come through in the group in front. Both he and Westwood hit huge drives on the par-4 hole.

After Westwood teed off first, Mickelson asked him if his drive was the perfect line. The Englishman confirmed it was and Lefty boomed his tee shot, with his Callaway Rogue driver, slightly right of his playing partner's ball, but still in position A.

Walking up to the slopey green, Mickelson's caddie informed me that he hit his tee shot 348 yards. It was slightly downhill with a helping wind and he had a short wedge shot left. Westwood's ball travelled longer towards the large fairway bunker.

The 51-year-old hit a lovely low, piercing wedge shot to about 15 feet and his putt clipped the edge of the hole, but it had too much heat behind it anyway.

Related: "If Vladimir Putin had a tournament, would you play?": Poulter and Westwood respond

Phil Mickelson almost played the 16th hole to perfection there in the pro-am, hitting a big 348-yard drive down the centre of the fairway at Centurion… #LIVGolf pic.twitter.com/uIubc8n5hp

For every shot Lefty hit, he used a GC Quad distance-measuring device which he would regularly use in his practice rounds. Throughout the day, different players were using a mixture of GC Quad and Trackman devices on the course and the driving range.

When I chatted to PGA Tour player Peter Uihlein on the driving range, he was using a Trackman device and he told me how he uses it to his benefit before a competition.

After double and triple-checking his yardage, Phil hit another low tee shot on the par-3 17th hole which travelled 151 yards. I only caught a couple of glimpses of his iron shots in the final stretch in St. Albans, but all of them were hit with low trajectories.

It looked as though he had dribbled his 15-foot(ish) putt short as it took a bobble. Nonetheless, it dropped in the cup which brought him a smile and Westwood too.

The 18th hole at Centurion is a par-5. On the way to the tee box, Mickelson told me that he'd made five individual birdies up until that point, discounting the scores his team had made in the pro-am format. He also said he was very pleased with how he played on Wednesday.

He hit another monstrous tee shot which split the fairway and so did Westwood. While walking to his ball, Mickelson told his playing partners that he'd been driving it well at home and playing solidly in general. This was very evident today.

He congratulated his playing partners on their performances while making his way to the 18th fairway. He described Centurion as a tough golf course.

After laying up, he hit another low wedge shot to the green, far too low. It pitched just above the bunker and dropped back into the sand. He was visibly shocked and disappointed. His bunker shot was ok, by his standards.

He couldn't match the sand-saving magic that Westwood produced. He found the left trap with his second shot, but he splashed his ball out to no more than two feet from the pin.

Mickelson had a spikey start to the day when he faced the media in the morning. Afterwards, he went and hit balls on the driving range next to Sergio Garcia and Dustin Johnson. Johnson and Oosthuizen were in the group behind during the pro-am.

Garcia, Johnson and Oosthuizen have both resigned from the PGA Tour, but Mickelson believes he is entitled to continue his lifetime membership after six major wins and 45 PGA Tour wins.