Rory McIlroy on MC: "I cried at the end of my bed in the hotel room"

McIlroy admits he even "raided the mini bar" to console himself. 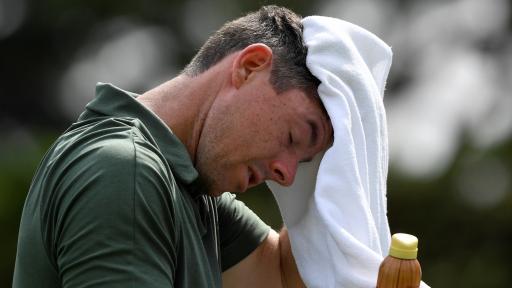 Rory McIlroy has admitted to once crying his eyes out in a hotel room during a European Tour event where he missed the cut, following an interview in the latest episode of Golf Digest's Local Knowledge podcast.

McIlroy was speaking about the emotional rollercoaster that golf at the top level brings and he highlighted a particular missed cut at the 2008 Ballantine's Championship miles away from home in South Korea as marking one of the lowest points of his career.

The Northern Irishman even admitted to "raiding the mini bar" to console himself.

RELATED: RAGING RORY MCILROY THROWS HIS 3-WOOD INTO THE TREES AT THE NORTHERN TRUST!

"I was 18 years old, on the road by myself, loving it because it’s independence," McIlroy said on Golf Digest’s Local Knowledge podcast.

"I’d just missed a few cuts in a row, and I was in Korea, Jeju Island, playing the Ballantine's Championship, and I missed the cut again.

"So I was struggling. I had never felt so far from home and so lonely. I remember going back to my hotel room, at the end of the bed, crying, and I raided the mini bar. Not the drinks. It was like Pringles, Coke, Toblerone. I just remember this complete meltdown."

"And then, this is how quick things can change in golf," added McIlroy.

As we all now know, McIlroy's career has been nothing short of phenomenal ever since with the Ulsterman going on to win four major titles, two FedEx Cups, three Race to Dubai titles and moving to World No.1 at eight different times in his career.

McIlroy earned his first victory on the PGA Tour in more than 18 months at the Wells Fargo Championship in May, but he has slipped to a current 16th in the world rankings, marking his worst position since November 2009.

The two-time FedEx Cup champion lies 28th in the standings heading into this week's BMW Championship, with the top 30 after Sunday progressing into the season finale at the Tour Championship next week.

McIlroy is attempting to win the FedEx Cup for a record third time. He currently shares the record of two FedEx Cups with Tiger Woods.