Rory McIlroy: Our most protective players just happen to be the best

Rory McIlroy raced into the early lead at the Travelers Championship with a stunning opening round at TPC River Highlands. 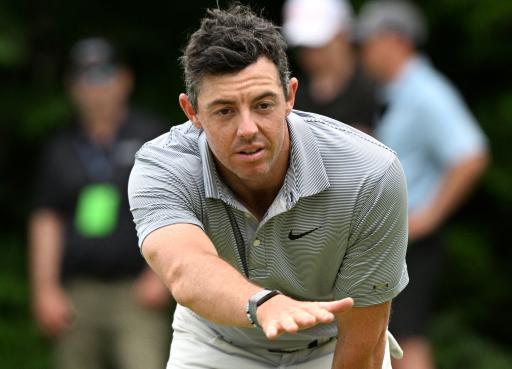 Rory McIlroy admitted he believes the players who are most protective of the PGA Tour just so happen to be the best after he raced into the early lead at the Travelers Championship.

McIlroy, 33, carded a bogey-free 8-under 62 at TPC River Highlands to continue his glistening form after another frantic week in the golf world that saw Brooks Koepka defect to the super-rich controversial league.

The Northern Irishman made five birdies on his front nine in Connecticut and three more on the back nine in his blemish-free round to take a one stroke lead over the American Xander Schauffele.

Schauffele, who hit all 18 greens in regulation, also admitted that he was presented with an “obnoxious offer” by the Greg Norman led-series but is staying on the established circuit for the time being, insisting that actions speak louder than words.

Asked yet again about the battle in the golf world, McIlroy said that he didn’t believe that the most protective players on the PGA Tour are trying to prove it.

Although McIlroy did take a dig at Norman after he earned his 21st PGA Tour victory at the RBC Canadian Open to leapfrog the Australian with wins on the circuit.

He said: “I just think it so happens that the most protective of the PGA Tour are the best players in the world right now.

“I'm not going out to try to prove anything to anyone. I'm in a good run of form. I'm playing well.

“Whether that gives me a little more confidence to speak up on certain issues, maybe.

“But I'm just going out there trying to play my game and trying to win some more tournaments.”

McIlroy admitted he didn’t watch PGA Tour commissioner Jay Monahan’s press conference where sweeping changes were announced to the 2023-2024 schedule, with increased prize purses to rival that of LIV Golf’s.

He added: “I spent maybe 30 minutes with him [Monahan] after the press conference yesterday. He's been consistent. He's addressing top player things. He's addressing everything that he said he would address.

“Some of the things that he said yesterday I think are great. Some of the changes that were made to the schedule, to -- I think Webb [Simpson] was talking about it, it'll make the regular season much more competitive.

“I think that's the thing, I was talking to the guys out there, like everyone starts at zero at the start of the year.

“Everyone has the same opportunity to make the big events with the big prize funds and whatever.

Does McIlroy believe the changes will make a difference to the players who are on the fence over LIV Golf?

McIlroy said: “Yeah, I think so. As he said, there's only one reason that the guys are going to the other side, and it's because they have an opportunity to make more money.

“Even though Scottie Scheffler has made $13million this season and it's only June. There are opportunities to make a lot of money out here.

“But like everything always has been in golf, it has to be earned. I think we appreciate that as players, and I think the people that watch us appreciate that, that again, we all start at zero at the start of next week and we all go again.”

Before he left his press conference McIlroy was asked if he feels exhausted having been asked so much about the situation.

“What the other guys do doesn't affect me. All I can do is go and try to play the best possible golf, be a good person, be a good dad, be a good husband, and like that's all I do.

“I try to stand up here and answer your questions truthfully and try to tell you what's on my mind.

“Sometimes that's to my detriment, I guess, in some ways.

“But I'd rather be honest and speak my mind than just stand up here and give you mundane answers that aren't indicative of how I am actually thinking and feeling about the whole thing.”