Rory McIlroy survived a scare on the final hole at Quail Hollow Golf Club to bag his 19th victory on the PGA Tour and his third Wells Fargo Championship title. 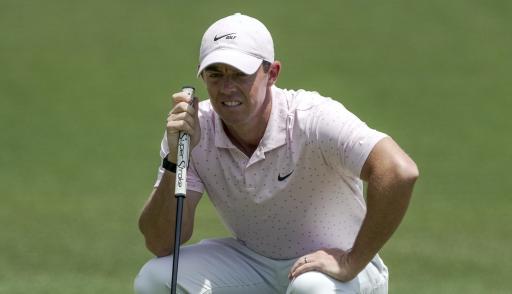 Rory McIlroy has bounced back on the PGA Tour in superb style by winning the Wells Fargo Championship for the third time in his career.

Entering the week at Quail Hollow, McIlroy had fallen to 15th in the world rankings which was his worst ranking since 2009, but he finished on 10-under-par on Sunday and one shot ahead of Abraham Ancer.

The Northern Irishman began the day two shots behind Keith Mitchell and he made a solid start to his round with birdies on the par-4 3rd hole and the par-5 7th hole.

The putter is red-hot for @McIlroyRory.

He takes over the lead at -9. pic.twitter.com/NX1lAZpfSF

The 32-year-old was 9-under-par for the tournament after his first nine holes and shared the lead with 2019 US Open champion Gary Woodland, in what was an exciting day in North Carolina.

RELATED: RORY MCILROY HITS IT OVER 370 YARDS DOWN THE 2ND HOLE AT WELLS FARGO!

A winning Mother's Day for the McIlroy's. pic.twitter.com/beOKPsQU54

McIlroy remained steady and birdied the short par-4 14th hole, having found the greenside bunker with his tee shot, and he added another birdie at the 15th hole to move to 11-under-par.

His work wasn't quite done as he hit his 18th-hole tee shot into a hazard, which he took a drop from. He hit his approach on to the green and two-putted for bogey to secure victory on 10-under-par to mark the first occasion of winning three times at a single event.

"It's never easy to win out here," said McIlroy.

"It's felt like a long time since that victory back in China in 2019, the world is a completely different place than it used to be. Everyone getting through a pandemic and life has changed a lot for me being a dad and winning on Mother's Day, thinking of Erica and my mum back home.

"It just feels awesome. This is one of my favourite places in the world and to break the drought and win here again is awesome.

"It's just awesome to play in front of these people again. When we came back from the pandemic, I thought I'd enjoy the peace and quiet a little bit, but I soon realised that to bring the best out of myself, I need this."

Ancer had set a promising clubhouse lead of 9-under-par. The Mexican began the day five shots off the lead on 4-under-par, but a great round of 66 gave him an outside chance of victory.

Mitchell was the overnight leader on 9-under-par, but the World No. 249 couldn't build on his advantage and he settled for a 1-over-par 72 on Sunday in North Carolina, finishing tied third with Norwegian Viktor Hovland on 8-under-par.