Rory McIlroy shot a fantastic 5-under-par 66 on Friday at Quail Hollow Golf Club to lift himself back into contention for the weekend. 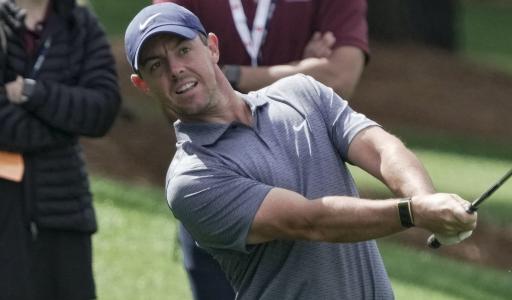 Rory McIlroy surged into contention for a third Wells Fargo Championship following a superb round of 5-under 66 on day two at Quail Hollow.

McIlroy, 32, bounced back from a disappointing first-round 72 to card his lowest round since the first round of the Arnold Palmer Invitational back in March, moving him to within just two shots off the pace with 36 holes to play.

The World No.15 had missed the cut in his last two strokeplay tournaments on the PGA Tour, and he could not hide his delight at the prospect of some "weekend golf" when he turned up for his post-round Sky Sports interview.

RELATED: RORY MCILROY REVEALS HUGE CHANGE TO HIS STYLE OF GOLF AS A RESULT OF TODAY'S TECHNOLOGY

McIlroy, who switched back to his old irons this week, showed a big improvement in the second round in North Carolina, making six birdies and only one bogey, as he finished on 4-under-par and within touching distance of the leaders.

The Northern Irishman returned to action this week for the first time since The Masters in April, and it was great to see him back in form on Friday.

It is clear to see that McIlroy's confidence was back, as he hit this incredible blind shot from next to a cart path to a foot from the hole.

The 18-time PGA Tour winner won the Wells Fargo Championship in 2010 and 2015 and he will be hoping to bag his 19th PGA Tour title there again this week.

McIlroy's form has not been great of late, missing the cut three times in his last six events including back-to-back missed cuts at the Players Championship and The Masters.