Former Open champion Shane Lowry has revealed he consulted World No.1 Rory McIlroy before accepting a new position on the PGA Tour. 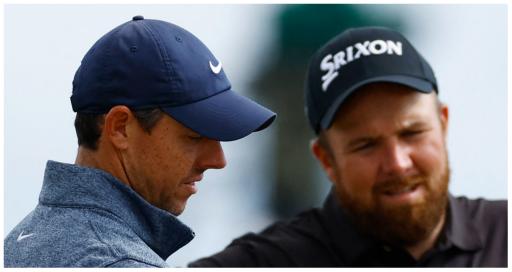 Lowry, who has his name emblazoned on the Claret Jug, was one of five non-Americans named by the Tour that will take up seats on the Players Advisory Council [PAC].

And he has revealed 33-year-old McIlroy, who is the PAC chairman, warned Lowry not to get involved if he was worried it would be too much of a distraction.

Speaking before the Abu Dhabi Championship on the DP World Tour, Lowry, 35, said:

"Rory texted me about the position and said to me that it's something that if you may want to be involved, and if you do feel you can benefit the committee then you should join.
"We then had a chat and he said if you felt that if it affected your golf and maybe takes up too much time, then it's probably not a good move.
"So, I spoke to my team Brian [Moran] and Connor [Ridge] and they were supportive which was also nice.
"It's going to be great getting more involved with the workings of the Tour."

Not everyone appears to be enthusiastic about the PAC.

Over the weekend former Ryder Cup skipper Paul Azinger turned heads with his comments about his 13-year stint on the committee.

Azinger described the role as "a colossal waste of time" during the Sony Open broadcast.

His comments appeared to be endorsed by former World No. 1 Lee Westwood, who wrote on social media: "Not often I agree with Zinger."

Westwood previously served on the PAC. Despite these comments, Lowry believes he can have a positive impact.

"I think where the game is at the minute, it would be nice to be involved and I feel like I could have a little bit of input into what's going on.
"The fact that I am a global player as well and I play a lot here in the Middle East and in Europe a lot, probably helped, and it's probably nice for them to have someone like that on the committee.
"You know, it will be nice. Hopefully I can — yeah, I don’t know what I can bring. I don't even know what it involves. I know it's four meetings a year.
"I don't know what we're going to be talking about in those meetings or on those calls or whether it be at tournaments.
"Yeah, I'm involved now and we'll see how it pans out."

Who is on the 2023 Players Advisory Council?