The Swedish golf legend talks Woods, Jin Young Ko and Nelly Korda, money from Saudi Arabia infiltrating the game plus her own career. 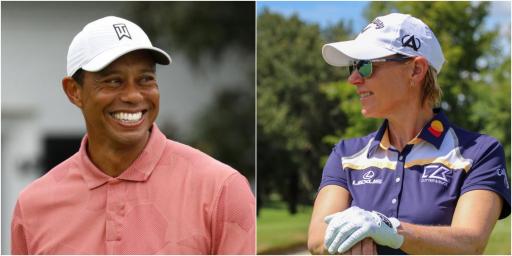 Annika Sorenstam has exclusively revealed to GolfMagic how she is not ruling "miraculous" Tiger Woods out of a comeback.

The Swedish golf legend has previously been candit about her amicable relationship with Woods over the years.

She has spoken before to other publications about how she felt a sting in her heart when she heard Woods was involved in a car crash.

It is hardly surprising Sorenstam walks in the same circles as the big cat as, after all, they both have dominated the game.

MORE: IS THE WHS SYSTEM GOOD?

Sorenstam won 10 major championships and 72 times on the LPGA Tour before she stepped away from the game in 2008.

Like Woods, when she returned she picked up right where she left off with a stunning victory.

Sorenstam won the U.S. Senior Women's Open by eight strokes in her first appearance in the event at the Brooklawn Country Club.

In an interview with GolfMagic, Sorenstam spoke on a number of topics.

They included race the for the LPGA Tour Player of the Year between Nelly Korda and Jin Young Ko.

Solheim Cup controversy was also touched upon, as well as her own career and the issue of Saudi Arabian money flooding into the sport.

Naturally, we had to ask Sorenstam about the big cat.

The last time she spoke to Woods was on the putting green at the PNC Champioship in 2020 a few months before his car crash.

"He played in the PNC Championship in Orlando with his son Charlie," she said sitting in her Florida home.

Sorenstam had just come back from a morning of biking before heading out to hit some golf balls on the range.

She continued: "I saw him on the putting green and a few times that week but yeah, that's the last time (we spoke).

"Obviously I'm not on tour (anymore) and...what happened to him.

"I'm communicating a little bit through Mark Steinberg (Woods' agent), kinda communicated through there, but I really don't keep in touch.

"But I hope to see him another time at the PNC."

Asked if she thinks Woods will make a comeback, she paused and said: "It's so hard. When it comes to Tiger you should never count him out.

"He has done some miraculous things in his life."

Sorenstam was speaking to GolfMagic as part of her new role as a brand ambassador for Revo Eyewear.

"I don't know if they'll lower my scores much," Sorenstam joked. "But I'll be fashionable and protected from the sun."

Keep checking GolfMagic for the next part of our Sorenstam interview.