Scott Stallings made an 8 on the 13th hole at the Farmers Insurance Open, but all his frustrations went away when he saw his daughter by the green. 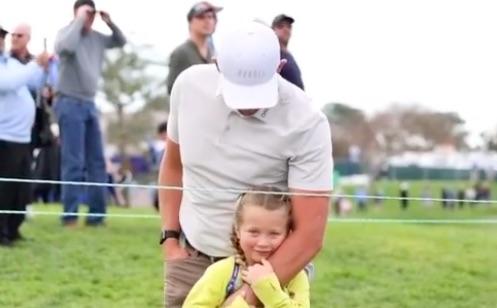 Sometimes when you are having a bad day on the golf course, you think of more important things in your life with a bit of perspective. This was certainly true for Scott Stallings.

This is easier said than done for PGA Tour players who are playing for their livelihoods, but this idea still rings true for some players.

Stallings played in the Farmers Insurance Open last week, the tournament which he won in 2014, and he finished in a tie for 46th place on Sunday.

On Saturday, Stallings was 2-over-par for the day and 1-under-par for the tournament before he endured a disaster on the par-5 13th hole.

Stallings made a triple-bogey 8 and fell back into the black numbers on the leaderboard. Like many players, Stallings will have been fuming and blowing smoke out of his nose and ears.

On his way to the 14th tee box, Stallings' daughter Millie was stood on her own by the walkway, waiting for her dad to come past.

In one single moment, Stallings' round and career didn't matter. At that moment when he hugged his daughter, he could've made a birdie for all we know.

"Made an 8 on 13 today and then walked off the green to this… They don’t care if I make a birdie or a triple. So blessed to have them by my side," the three-time PGA Tour winner tweeted after his round.

The 36-year-old and his wife Jen have two children, Millie and Finn. He turned professional in 2007 and made his PGA Tour debut in 2011 when he won the Greenbrier Classic.

So far, the 2022 PGA Tour season hasn't been kind to Stallings. He has made two top-10's but he has also missed four cuts.

NEXT PAGE: "TIGER WOODS NEEDS TO WATCH HIMSELF": US WINTER OLYMPIAN SENDS STATEMENT