Scottie Scheffler received a letter from President George W. Bush but the World No.1 wasn't impressed by one feature of the note. 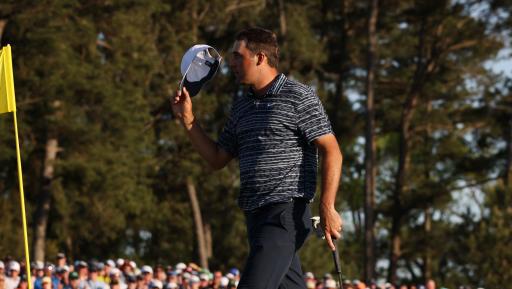 World No.1 Scottie Scheffler is currently living his dream on the PGA Tour and his success has opened many avenues in his life.

After winning his first major championship at The Masters earlier this month, Scheffler received a letter from George W. Bush, the former President of America.

It was a hand-written note from the 43rd leader of the United States, but the 25-year-old was jokingly disappointed with how the letter was written.

"I hear he’s a good artist now. He’s got to do some work on his handwriting," Scheffler said.

"Stuff like that is pretty cool. To have someone like that to reach out just to congratulate me is pretty special. That’s probably kind of the only moments I’ve had where I sit and reflect on what’s happened the past month and a half, two months.

"Obviously The Masters is such a different event than the rest of them. Just getting some messages like that from people I’ve looked up to for so long is really special."

Scheffler has experienced a meteoric rise in the world of golf. When he arrived at the WM Phoenix Open at the start of February, he had never won on the PGA Tour and he was ranked 14th in the world.

He went on to win the event at TPC Scottsdale as well as the Arnold Palmer Invitational, the WGC Match Play and the Green Jacket at Augusta National.

Not only has he received messages of support from politicians, but Scheffler revealed that superstars from other sports have sent him encouragement too.

"I’m not really on social media. My wife has showed me a few things that people have posted, like Michael Phelps posted me in one of his stories, and then (Ezekiel Elliott) from the Cowboys sent me a message," Scheffler added.

"Just random stuff like that where I’m able to sit back - Michael Phelps is just insane. The guy is one of the greatest athletes ever. For him to reach out and post something about me or whatever is pretty cool.

"That’s some of those moments where I’m able to sit back and kind of reflect on what happened and just be really grateful for it because stuff like that doesn’t come around too often. So it’s pretty special."

Next Page: Billy Horschel will defend BMW PGA Championship at Wentworth in 2022