Scottie Scheffler is in hot pursuit of his first victory on the PGA Tour and he was just four shots behind Martin Trainer after his second round of the Houston Open. 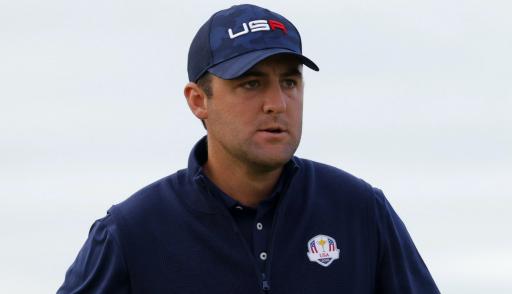 Scottie Scheffler fired a course record on day two of the Hewlett Packard Enterprise Houston Open, shooting a 62 to leap into contention heading into the weekend.

Scheffler had to finish his first round on Friday morning, which ended in a 2-over-par 72. But his second round couldn't have been more different.

The 2021 Ryder Cup debutant made five birdies on his front nine in the second round at Memorial Park, but gave one shot back at the par-4 4th hole.

Scheffler, still yet to win on the PGA Tour, made consecutive birdies from hole 8 to hole 11. He added birdies at the 15th and 17th holes to finish on 8-under-par for the day.

The 25-year-old moved from cut line calamity to tournament contention. When leaving the course, he was on 6-under-par for the tournament and four shots behind surprise leader Martin Trainer, before darkness brought an end to day two.

With his fantastic score of 62, he set the course record and the tournament record for a single round. He has also had four rounds of 62 or better since his rookie season in 2019/2020, which is the most of any player on the PGA Tour.

Trainer, who held the clubhouse lead on 10-under-par, had made only one cut in his last 18 starts. His first two rounds of 65 have taken him to a 36-hole lead on the PGA Tour.

After his second round, he was one shot ahead of Kevin Tway and two shots ahead of Jason Kokrak, who won twice on the PGA Tour in the 2021 season.

Sungjae Im, the winner of the Shriners Children's Open, has shot rounds of 68 and 70 to sit on 2-under-par and eight shots behind the clubhouse leader Trainer.

Brooks Koepka has been struggling to find his best form in this new PGA Tour season with finishes outside of the top-30 in each of his three appearances.

RELATED: TIGER WOODS' SCORING AVERAGES BY YEAR ARE SCARY, ESPECIALLY THAT SEASON IN 2000

The four-time major champion shot 2-over-par on Friday in Houston to finish on 3-over-par for the tournament, making it likely that he will miss two consecutive cuts on the PGA Tour.

As well as Koepka flirting with the cut line, Ian Poulter, Shane Lowry and Tyrrell Hatton also finished above the projected qualification mark of 1-over-par.

NEXT PAGE: DEBATE: WILL RORY MCILROY RETURN TO BE WORLD NUMBER ONE WITH MICHAEL BANNON?