PGA Tour professional Joel Dahmen responded to a punter suggesting they were about to wager large money on him missing the 54-hole cut at the AT&T Pebble Beach Pro-AM. 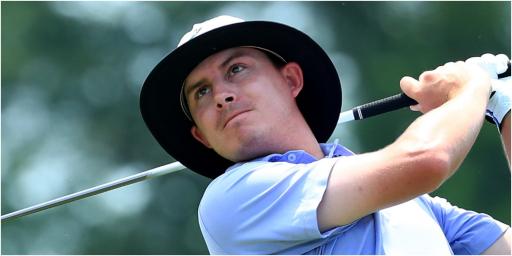 PGA Tour professional Joel Dahmen had a rather interesting message to wake up to before the AT&T Pebble Beach Pro-Am.

A punter had decided to post a rude message to him with a screenshot of a bet showing odds of him missing the 54-hole cut at Pebble Beach.

"Hey f*** you Joel Dahmen" the message came from the account. Well, that's not very nice is it. Perhaps a timeout is needed.

One phrase that comes to mind when reading such profanity is: "Put your money where your mouth is."

At the time of writing Dahmen had made a solid start in the first two rounds of play. A 71 was supplemented with a 64 to see him at 9-under.

Seamus Power had a five shot lead after going lower than anyone else in history after 36 holes at the storied venue.

The 34-year-old made 10 birdies and two bogeys in his second round of the event, which sees celebrities also taking part.

What a lovely thing to wake up to. https://t.co/OpYfGxkMSk

Dahmen decided to respond by posting: "What a lovely thing to wake up to". His caddie Geno Bonnalie also picked up on the post.

"Hit submit, chicken," Bonnalie replied who only a few weeks ago posted some hilarious tales about his employer.

Bonnalie filmed a taxi driver taking them to the course at the Tournament of Champions in Hawaii.

The taxi driver had no idea Dahmen was playing and was giving him some tips on where to get the best viewing spots.

Then a week later at the Sony Open, Bonnalie told how Dahmen had instructed him to grab a hot dog just before his first round.

He then documented the progess of the "pro athlete" diet throughout the day, which included a Mountain Dew at the turn.

Bonnalie was also at hand this week to discuss how expensive life on tour can be.

He posted a picture of his small living quarters and divided the cost of the room by four with his fellow caddies.

Dahmen is making his fourth appearance of 2022 at the AT&T Pebble Beach Pro-Am.

He missed the cut at the Sony Open and also at the Farmers Insurance Open.

To date, he has played in 139 official events, making the cut 89 times, according to the PGA Tour official website.

He has nearly $8million in life time earnings on the PGA Tour.

They say revenge is a dish best served cold, so hopefully we can get an update when Dahmen makes the cut.