Sebastián Muñoz pulled his tee-shot on the par-4 18th hole a little too far to the left and his ball came to rest in a very unusual place. 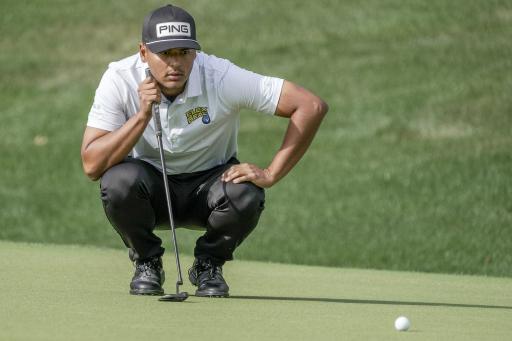 An incredibly rare and amazing thing happened to Sebastián Muñoz at the PGA Championship on Thursday at Kiawah Island.

The Colombian arrived on the 18th tee box having played his first seven holes in 1-over-par, as he started on the 10th hole, and he took aim down the lefthand side with his drive.

However, he pulled his drive a long way to the left and completely missed the fairway. His ball flew towards the grandstand and came to rest in a rubbish bin.

Hole in one?!
Sebastian Munoz's tee shot lands in the trash can.

The fans around the bin rejoiced at the quite amazing thing that had just happened before their eyes and Muñoz found the funny side of things when he walked up to his ball.

The 28-year-old was informed by a rules official that he could reach into the bin to take his ball out and claim relief. He went on to make a par and complete his first nine holes in a respectable 1-over-par.

Many golf fans on social media took advantage of what they had just seen and made comments and jokes at what was an extraordinary highlight on day one of the tournament.

The shot was made even more memorable when Muñoz gave his ball that had landed in the trash to a fan on the 18th hole.

Here is what golf fans had to say on social media:

Sebastian Munoz just hit his drive at 9 into a portable trash can next to the stands. They had to decide who was going to reach in to grab it. Hilarious.

Sebastian Munoz tee shot on 18... right into the trash can.

Don't worry, though: He picked it out and tossed it to a fan.

Sebastian Munoz after hitting his drive into a trash bag on 18: "Do I have to get it?"

And Sebastián Muñoz got a par on the hole! #PGAChamp https://t.co/BESCWmRXfn

@steverosenbloom @markgrotesports I say Sebastian Muñoz's tee shot at 18 should qualify for Saturday Suckage. Literally landed in the trash