Viktor Hovland has been in great form on the PGA Tour this season and he caught the eye at Kiawah Island when discussing a difficult shot with his caddie. 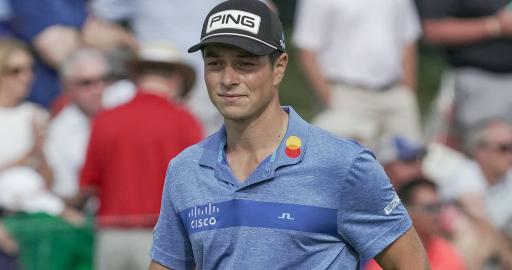 Viktor Hovland entered the week at the PGA Championship in arguably the form of his career and was one of the favourites to win his first major.

On Thursday at Kiawah Island, Hovland found himself with an incredibly difficult shot at the par-4 4th hole, which was the young Norwegian's 13th hole of the day.

He was negotiating whether to play the shot with his feet inside the edge of the bunker, as his ball had settled precariously close to the sand hazard.

This interaction between Viktor Hovland and his caddie is gold.
"I kind of want to try this." "Ok."
"actually pretty sick." "Not the end of the world."
pic.twitter.com/MxwOpfycqj

What followed was an intriguing exchange where Hovland and his caddie Shay Knight discussed what to do in the situation, and the World No. 11 entertained viewing golf fans with his thoughts.

It is always great to hear discussions between a player and his caddie as we can listen to the insight of PGA Tour players and how they negotiate the course.

Hovland took a gamble with the shot and he managed to hit his ball just left of the green from 185 yards to the hole, where he was able to make a great par.

Pretty tough not to root for Viktor Hovland. pic.twitter.com/A3G7OBCxxR

"What's the cover on the crap here?"
"I kinda want to try this."

"What is it to cover the crap?"

It is clear to see that Hovland has gained a lot of fans on the PGA Tour this season and he continues to thrill people with his play and personality.

NEXT PAGE: PAULINA GRETZKY: "DUSTIN JOHNSON TOLD ME ABSOLUTELY NOT TO PLAYBOY!"