Miguel Angel Jimenez made two hole-in-ones at the Cologuard Classic on his way to securing a four-shot victory and his 12th win on the PGA Tour Champions. 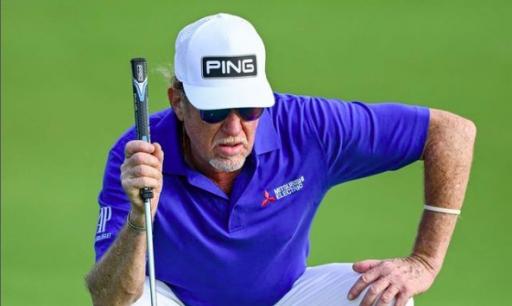 Miguel Angel Jimenez, the European hole-in-one king, made two aces during the week at the Cologuard Classic to win his 12th PGA Tour Champions title.

The 58-year-old made a hole-in-one on the par-3 14th hole to pull away from the great Bernhard Langer and secure a four-shot victory at Tucson National.

Jimenez's ace on the back nine in the final round was his second of the week. He made his first one on the seventh hole in the first round.

In 2015, the popular Spaniard made a hole-in-one on the par-3 second hole at Wentworth to break the European Tour hole-in-one record with 10 aces.

RELATED: PGA TOUR: HOW MUCH DID EACH PLAYER WIN AT THE HONDA CLASSIC?

He drains it and treats the crowd to a victory dance. pic.twitter.com/x9g1cUMWKA

Jimenez entered the final round of the Cologuard Classic with a two-shot lead and he extended this with a birdie and an eagle in his first two holes.

Langer got within three shots of the lead with four birdies on the front nine, but with his ace on the 14th, Jimenez pulled away to win on 18-under-par, winning for the second time in his last three starts on the PGA Tour Champions.

Langer, who won his 43rd PGA Tour champions title at the Chubb Classic last week, finished in a tie for second with Woody Austin on 14-under-par.

Jimenez won for the first time on the veteran's tour at the Greater Gwinnett Championship in 2014. He made his PGA Tour debut in 2000.

He has 21 wins on the DP World Tour in his career and he has represented Europe four times at the Ryder Cup, winning the event twice.