Shane Lowry struggled on the front nine of his third round at the BMW Championship, so he acquired the services of a certain holy figure to help him out. 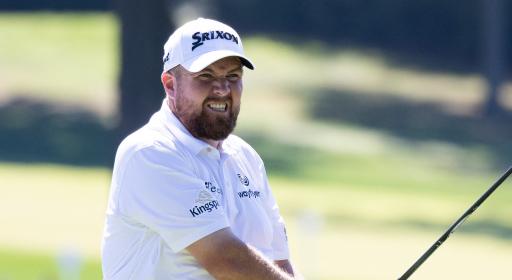 Shane Lowry finished in the devastating position of 31st in the FedEx Cup standings having come tied 12th at the BMW Championship, narrowly missing out on the Tour Championship.

Despite missing out on the season's finale, the Irishman has had a very solid season. He finished second at the Honda Classic and tied third at The Masters and the RBC Heritage.

The Irishman carded scores of 66, 71, 71 and 68 to finish six shots behind Patrick Cantlay who successfully defended his title from the previous season at Wilmington Country Club.

Lowry could tell that his round on Saturday was going south after making three bogeys in the space of six holes on the front nine, so he wanted to acquire the services of a famous holy figure.

Played so bad on the front 9 I got Jesus on the bag for the back.

"Played so bad on the front 9 I got Jesus on the bag for the back," Lowry joked on Twitter on Sunday. As you can see in the footage of his tweet, his caddie decided to sport a pair of sandals as opposed to golf shoes.

Along with his thick, grey beard, Brian "Bo" Martin certainly had the Jesus look about him in Delaware. Lowry reportedly gave him a pair of Air Jordans to wear, but Martin opted for the sandals to avoid blisters.

The 2019 Open champion, who has had Martin on the bag since September 2018, played much better on the back nine in the third round by making three birdies to claw back his score

Lowry used to have fellow Irishman Dermot Byrne on the bag, a relationship which spanned nine years from when he won the Irish Open as an amateur in 2008.

Things have not always been plain sailing for the major-winning pair. Lowry fired some expletives at his carrier during the third round of The Masters in April.