Billy Horschel was frustrated with himself at the BMW Championship and slammed his golf club into his bag, only for a moment of pure comedy to unfold. 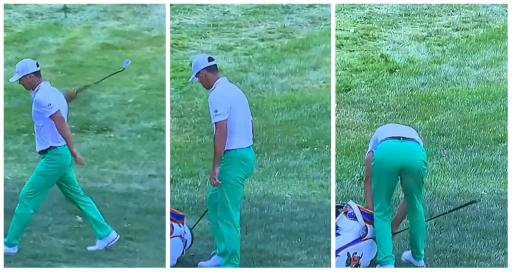 When it comes to Billy Horschel, he is absolutely not afraid to display his emotions on the golf course or offer his opinion.

On more than one occasion, the PGA Tour pro has had to apologise as his temper has gotten the better of him.

Who can forget his regret at the 2015 U.S. Open where he had to say sorry after almost embedding his putter into the green in anger.

Then there was the time he simply did lose it at the 2021 Masters when he was filmed repeatedly slamming his flat stick into his golf bag.

Horschel, now 35 years old, previously made a grovelling apology to the patrons about this. "I am and have always been a fiery competitor," he wrote on Instagram.

"That will never change. I try and conduct myself to the highest level everyday. I support and congratulate my fellow playing partners on a regular basis throughout the round."

Related Articles
Tommy Fleetwood to Tiger Woods: "Have you EVER played golf before?"
Max Homa apologises for "disparaging comments" about World Cup

Well, the more things change, the more they stay the same. This latest outburst (if we can call it that?!) came from Wilmington Country Club during the second leg of the FedEx Cup Playoffs.

We catch up with Horschel here at the BMW Championship by the 14th green. It's a par-5, measuring at 622 yards. Horschel finished comfortably inside the top-30 players in the FedEx Cup standings to make it to the Tour Championship at East Lake.

Still, he wanted to try and improve his score considerably and move up the leader board. Horschel made a par on this hole, but the fact that this was a scoring opportunity lost for Horschel really ticked him off.

He walks off the green, and slams his wedge into the bottom of his golf bag ... only for it to get stuck!

For the last few months, he has been outspoken with regards to the LIV Golf Invitational Series.

So much so, he has accused players of outright lying about what has been going on.