Stewart Cink has clarified the origins of his hilarious nickname after Tiger Woods referred to him as "Kitchen". 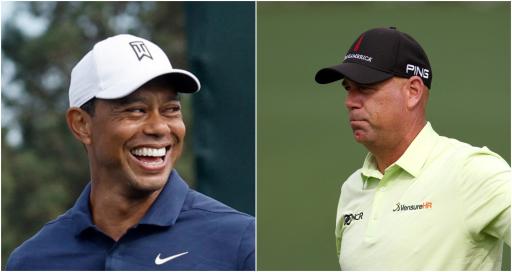 Tiger Woods hilariously referred to Stewart Cink as Kitchen at The Masters. But despite what he may think, the 15-time major champion did not come up with the nickname.

Cink made an ace at Augusta National's iconic No. 16 during Friday's second round.

With his son Reagan on the bag and the fact it was also his boy's birthday, it was an awesome moment.

Of course Woods was asked about what it was like to be back at one his favourite places on Earth as a competitor.

The roars from the crowds, in particular, will have been something he might have felt he would never experience again after his car crash.

"I think Kitchen made one the other day.

"To hear that roar down there at the bottom on 16, just to hear that excitement of what this tournament brings out."

Kitchen! Get it? As in Kitchen Sink. Woods didn't opt for his traditional choice of just adding 'ey' to a surname.

Unfortunately, the nickname wasn't given by Woods to Cink, despite the big cat thinking otherwise.

Cink, who is the defending champion of the RBC Heritage on the PGA Tour this week, explained the origins of his nickname.

"Well it's been something that people called me ever since I was little," he said.

"Ever since I can remember. Tiger thinks he started that, but he did not start that.

"I've been referred to as Kitchen ever since I was a little kid playing golf back in Florence, Alabama growing up.

"There was a guy named Tim Kitchens who I played in a couple partner events with up there everybody just thought that was the funnies thing that Kitchens and Cink were playing together.

"And I was 13, 14 years old when that happened, people been calling me that for years.

"Tiger's always called me that, it's just kind of a funny nickname, Tiger's got nicknames for everybody just like we have for him and everybody else too.

"It's is part of the locker room banter."

Well there you have it.