Cameron Young was faultless on his way to an opening 8-under 63 on day one of RBC Heritage on the PGA Tour. 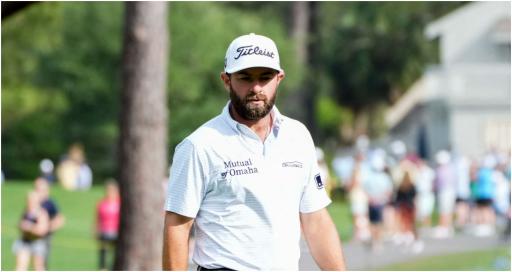 Cameron Young says he learned a lot about himself after missing the cut at the Masters as he raced out of the blocks at RBC Heritage.

Young fired a bogey free 8-under par 63 at Harbour Town Golf Links on the PGA Tour despite having never played the course in competition.

He's watched this tournament a number of times on the television, he said in his press conference, and is happy his "low round" came early.

Young, 24, has had a solid season so far. He missed a couple of cuts at the beginning, but since then has been a top-10 machine.

It earned him a spot at the Masters as he raced up the Official World Golf Ranking but he missed the cut after going 77-77.

"I learned that I have a long way to go," he said after his first round where he fired eight birdies.

"I've shown that I can compete at this level, but so far in the couple majors I've gotten to play, I haven't been able to do that.

"I think it just gives me more reason to go out and try to get better to a point where I'm more comfortable and able to have a week where I contend in one of those."

Shane Lowry (66) and Patrick Cantlay (66) both have started well too and are only three back from Young.

Cameron Smith, who memorably found the water at No. 12 at Augusta National to see his Masters dream go up in smoke, struggled on day one.

He was 4-over par after his first four holes which included two double bogeys.

Lowry said of his round: "It was pretty good. I woke up this morning, I couldn't believe it was Thursday already. It was one of those I felt like the Masters was only yesterday, and I felt quite tired.