Justin Thomas to Max Homa: "Why are you spreading fake rumours?!"

Justin Thomas and Max Homa got into a funny exchange on social media about the Saudi golf league. 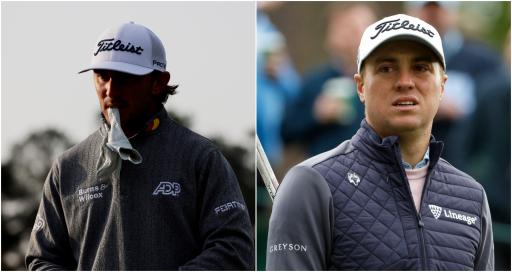 Earlier in the week Greg Norman, 67, said marquee names are set to be announced for his for his rebel tour.

Centurion Club in St Albans will host the first tournament, where a 28-man field will compete for the $25million purse.

There will be individual and prize team rewards on offer. In total, the series will have $255m up for grabs.

No names have been confirmed but the likes of Ian Poulter, Lee Westwood, Kevin Na, Jason Kokrak and Bubba Watson are key targets.

Phil Mickelson has been a divisive figure in all of this and is currently taking an indefinite break from golf.

Mickelson accused the PGA Tour of obnoxious greed when they threatened to ban players taking par in the breakaway league.

Then he appeared to contradict that statement with his comments to the biographer Alan Shipnuck.

Those comments, which many viewed as amoral, were this week described as a gut punch by Norman.

But he has said that "everybody makes mistakes" and Mickelson would be allowed back into the fold when he is ready to return to golf.

Lefty has already registered himself as a competitor for the U.S. Open.

In the midst of all of this, you might think that some PGA Tour pros are more "in the know" than others.

Homa is absolutely none the wiser and like all of us is just enjoying the ride on social media:

My favorite part about this Liv golf stuff is that I, a card carrying member of the best tour in the world, know absolutely nothing about what’s going on. I am enjoying the ride with everyone on social media

That’s not what you told me last week… you knew a lot. why are you spreading fake rumors max? Or are you not? Did I make all of this up? What’s happening? #socialmedia