A spectator fell to the floor after Stewart Cink celebrated his RBC Heritage victory by throwing his golf ball into the crowd. 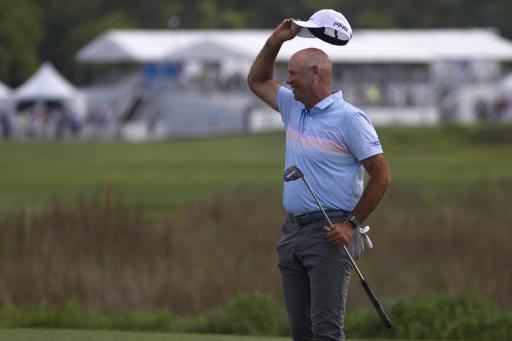 Stewart Cink claimed his third RBC Heritage title on Sunday and his second PGA Tour victory of the season, but his brilliant victory had a slightly awkward ending when he threw his golf ball into the crowd.

It's always been a celebration that I've never really understood and it's not really a surprise that we don't see it too often anymore.

Most spectators in the crowd will have their eyes on the player celebrating their win, so if a golf ball is thrown towards them, you'd hope they would see it coming, but there's always the danger that some people aren't paying attention and that's exactly what happened at Harbour Town Golf Links yesterday.

It did seem like a slightly exagerrated fall from the spectator - who perhaps was thinking of an insurance claim - but I'm sure it still had Cink feeling a little worried for a moment.

After claiming his eighth PGA Tour title on Sunday, Cink was celebrating his victory with his family, when the 47-year-old decided to throw his ball into the crowd of spectators...

WATCH CINK HIT A SPECTATOR IN THE CLIP BELOW:

Hopefully the spectator involved is okay and I'm sure they are, but after the video was posted on No Laying Up's Twitter page, a fellow PGA Tour player replied in the comments, sharing his own story where he got into some trouble for doing something similar.

I threw a strike to a kid at Memorial one year and knocked his tooth out. I was politely asked not to do that again.

NEXT PAGE: How much Stewart Cink and every player won at the RBC Heritage