We saw some fantastic shotmaking and clutch hole-outs at The American Express in California, but who hit the best shot of the week? 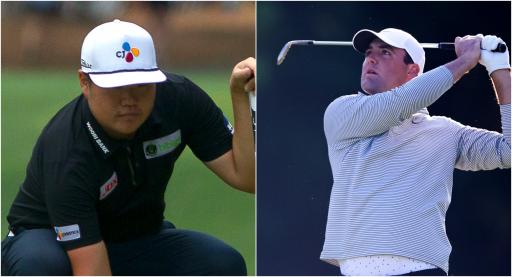 The American Express is always a very unique and exciting event as it is held at three courses: the PGA West Stadium Course, the PGA West Nicklaus Tournament Course and La Quinta Country Club.

Hudson Swafford came out on top with a fantastic 64 in the final round. He finished two shots ahead of Tom Hoge to win his third PGA Tour title.

It was an emotional victory for Swafford whose father passed away recently. The 34-year-old shared the victory with his family after he parred the 72nd hole at the Stadium Course.

Golf fans at home and spectators in California were treated to some fine shotmaking throughout the week and in the final round. It was another event that built the appetite for the coming weeks on the tour.

Take a look below at the top five shots from The American Express.

Sungjae Im produced a moment of magic on Friday on the 8th hole on the PGA West Stadium Course. He had a wood in his hands and 263 yards left into the green with the ball below his feet.

The strike was pure and his ball landed just right of the pin. The ball trickled down towards the hole and the South Korean rolled in his only eagle of the week. He finished tied 11th.

In round three, Scottie Scheffler was battling hard to make the 54-hole cut which stood at 7-under-par. The American came up with the goods on the par-5 16th hole on the Stadium Course.

Scheffler's ball was well below the green, but he pitched it up perfectly on to the putting surface. The ball grabbed and trickled perfectly into the hole. He went on to finish tied 25th.

EAGLE for @TheLanto61 to move 1 back!

Lanto Griffin was unlucky not to win his second PGA Tour title this week. A fantastic shot at the par-4 12th hole on the Stadium Course did nothing to halt his charge on Sunday.

From 110 yards, Griffin arrowed his approach shot straight at the hole. After just a couple of bounces, the ball found the bottom of the cup for an eagle two. He finished three shots behind Swafford in tied third.

Considering the nature of Swafford's up and down back nine and the pressure he was under, his eagle at the 16th hole on Sunday was incredibly nerveless and brave.

He hit a pinpoint shot from the fairway from 198 yards. It finished roughly seven feet from the hole and this eagle gave him a two-shot lead.

Patton Kizzie made his third ever hole-in-one on the PGA Tour at the par-3 4th hole at the Stadium Course on Sunday. It's also the first ace to be made on this hole in competition.

From 171 yards, Kizzire's ball only took a couple of bounces before finding the bottom of the cup. He went on to finish in tied 22nd.