Sungjae Im gives it large to 'Gangnam Style' at Presidents Cup After Party! 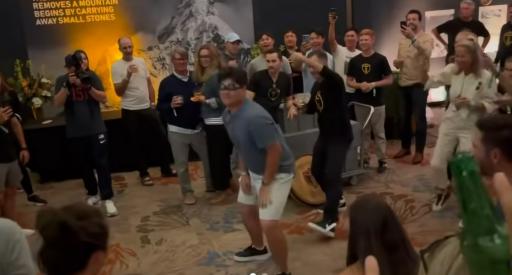 The Presidents Cup proved to be an extremely enjoyable week at Quail Hollow Club, but on first look the After Party looked even better.

After Davis Love's victorious United States side ran out convincing 17.5-12.5 winners, the team were seen celebrating with champagne, beers and cigars just like we saw when they destroyed Europe at the last Ryder Cup.

Their victory marked their 12th in 14 editions of the Presidents Cup, while it extended their winning streak to nine in a row.

But it would appear as though Trevor Immelman's International side were not feeling too disheartened for long as they very much got stuck in on Sunday night, too.

First we saw Hideki Matsuyama's caddie covered in ink by fellow caddies, and now thanks to Tony Finau, we have footage of Sungjae Im dancing to the famous 'Gangnam Style' song with everyone going mad for him.

The music video for this track by South Korean rapper and singer Psy premiered in July 2012 on YouTube, and it was later made available to download digitally in 2019.

The video is now the 11th most viewed video ever on YouTube and it became the first ever music video to surpass 1 billion views on the platform.

Take it away, Sungjae...

"Trevor Immelman and his team played some great golf and although they didn't win the cup they definitely won the after party as shown here by Sungjae Im.

"See you guys in Montreal."

Despite being on the losing side, Im took 2.5 points from a possible five at the 2022 Presidents Cup.

Finau, who was on the winning United States side just as he was at 2021 Ryder Cup, picked up three points from a possible four.

The next Presidents Cup will take place at Royal Montreal Golf Club in Canada in 2024.

Next Page: Here's why there are no South Korean players on LIV Golf at the moment